A Minute Of Silence, Please. 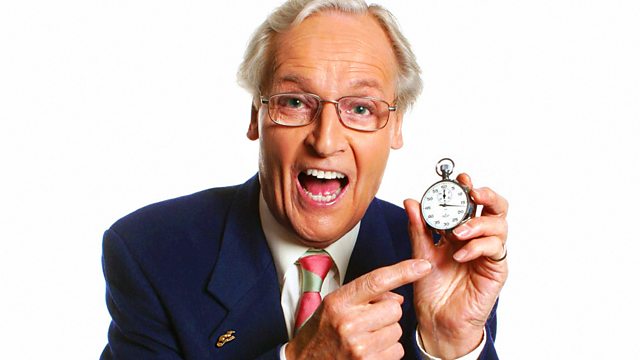 I used to listen to BBC Radio 4 a lot. And by “a lot” I mean at least four or five hours a day at work, usually while working on mundane tasks. Sometimes it was just background noise but when I heard Chopin’s Minute Waltz I turned my full attention to the radio because that meant it was time for Just A Minute. Just A Minute, if you’ve never heard of it, or heard it, is a quiz show with a four-person panel. A panel member would be given a topic and would have to speak on it for a full minute without hesitation, repetition, or deviation. If they do any of these another panel member can challenge. The challenger can then get the subject for the remainder of the minute—even if it’s just a second. Points are awarded for successful challenges and for speaking when the timer goes off.
Hesitation and repetition are easy but the definition of “deviation” has deviated over the years. Originally it was deviation from the subject but it’s been applied to deviations from “English as she is spoke”, from the facts, or even from logic. When Sir Clement Freud mentioned that his son had just given birth to a grandson Paul Merton challenged, saying that so far no one’s son has given birth.
The host from the show’s start, when it was called A Minute Please, and for the more than four decades it ran was Sir Nicholas Parsons. Friendly, subtly witty, and never seeking the spotlight himself Parsons was the perfect host. He also hosted the TV version of Just A Minute. A friend of mine who grew up in Britain tells me he also hosted a TV game show called Sale Of The Century, which I’ve never seen, and which my friend says “was an awful game show, but when you only have three channels…” And he added that Parsons himself was always a classy but warm and friendly host. On Just A Minute he was a funny, kind, and always fair arbiter, the sort of guy you’d want refereeing any competition. His old-fashioned gentility is probably why another British friend made fun of me for liking him so much. “You and my gran,” she said, “could have a nice cuppa and sit together and listen to that.” That was part of the fun, though: it really was a show for all ages. Maybe this is where I confess that one of my life goals was to be a panelist on Just A Minute.

Just A Minute ran for fifty-two years and some of its panelists include Eddie Izzard, Rob Brydon, David Tennant, Sandi Toksvig, and Miriam Margolyes. Graham Norton was a regular panelist, stepping out of his usual host role, and while he rarely got challenged for hesitation he had a hilarious way of drawing out syllables, obviously playing for time.

The length of the show’s run meant that Parsons was still hosting at the age of ninety-six, and in all those years only missed one show, due to illness. He also had a fascination with clocks–he tinkered with watches as a hobby, and in 2016 hosted the documentary The Incredible Story of Marie Antoinette’s Watch. Maybe this is where I confess that one of my life goals wasn’t just to be a panelist on Just A Minute but also wear one of my pocket watches and talk to Parsons about why they never should have gone out of fashion, but that’s another story.

Hail and farewell Sir Nicholas Parsons. I won’t hesitate to say your charm will never be repeated, and no one will accuse me of deviation for saying so.

And, seriously, here’s an episode of Just A Minute. Take a listen and you’ll be amazed how the time flies by.