-Rudyard Kipling, The Cat Who Walked By Himself.

After my morning meeting, since this was a work day, I went out to get the mail. It’s one of many small parts of my new daily routine—new, anyway, four about six weeks now. And our youngest dog, Sabik, who’d been helping my wife work, and by “helping” I mean “sleeping in his dog bed next to her desk” got up and followed me to the door. I went out and he stayed behind, staring at me sadly. It’s a look I know all too well, a look that says, “Why can’t I come with you?” Dogs are pack animals, after all, and they don’t like it when a member of the pack goes off alone. He wants to be there to protect me.

A few minutes later, mail in hand, I came back, and Sabik was still at the door. He was wagging his tail so hard his whole body was blurry and he was humming. Dogs don’t just growl, whine, and bark. Any dog parent can tell you that despite not having vocal chords dogs are remarkably articulate, but that’s another story. The wagging and happy hum is also something I know well. Back when I’d go to work at the office instead of down the hall, if my wife stayed home, I’d often be greeted by a dog at the door. If I drove they could hear the car, and in a way it was better if I took the bus and walked home, so I could surprise them. When I get the mail and come back it’s only a few minutes but the dogs are just as happy as if I’d been gone hours. Some people think that means dogs are idiots, but what it really means is those people are assholes and don’t understand that dogs are pack animals. They understand that what affects one member of the pack can affect the whole. They’ve been domesticated, physically altered, and changed by us, but certain qualities—some of their best qualities—have been kept, with a few mistakes along the way. 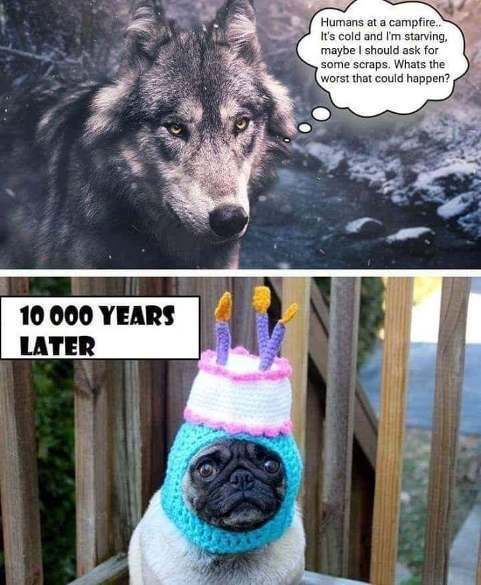 They’re a little bit of nature we’ve assimilated into our “civilized” world.

There’s been a flood of stories lately of animals “reclaiming” areas humans under quarantine aren’t using right now, like national parks where animals are moving more freely than usual. And there have been other examples of nature “returning”, like the clear skies over Los Angeles because of fewer cars on the road. Some people think these stories are funny, and, yeah, that story of the Welsh town being taken over by wild goats is pretty funny. Some people see them as ominous, having a post-apocalyptic quality. I’m surprised I haven’t seen more references to the film Twelve Monkeys, especially the scenes where zoo animals have taken over the abandoned cities. Maybe people don’t want to be reminded of a fictional pandemic in the middle of a real one. The film is set in the year 2035, which is closer than it was in 1995 when it was released, but feels like it could tomorrow, maybe even now, and not fifteen years in the future.

Both the people who think the stories are funny and the people who see them as something ominous are right. They’re funny and they’re unsettling—for the same reason. These stories of nature “reclaiming” spaces humans aren’t currently occupied should remind us that nature isn’t something separate. It’s not something we, as humans, can remove ourselves from. Environmentalism gets a lot of knocks for supposedly taking away peoples’ livelihoods, but really it’s an acknowledgement that, for people to live, we have to be responsible. We can’t act like the “natural world’ is something that’s just outside. The only way we can be healthy is if we have clean air, clean water, a clean environment. There is no place in the world that we share with each other that we can poison without poisoning ourselves.

That’s why dogs aren’t idiots. They’re pack animals. They understand the importance of protecting the pack.