A Fungus Among Us.

Freethinkers Anonymous > Submitted For Your Approval. > A Fungus Among Us. 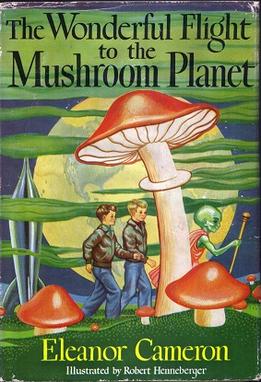 When I was a kid I liked science fiction and mushrooms. And a lot of other things, and it now occurs to me that I still like both, and a lot of other things, which may be why every few years I go back and reread The Wonderful Flight To The Mushroom Planet by Eleanor Cameron, which my mother first gave me when I was eight or nine, and with Mother’s Day coming up I thought this would be a good chance to express my appreciation. It’s a fun book that’s never been out of print since it was first published in 1954, so it’s kind of weird to me that more people haven’t heard about it. In fact I was over at my neighbor’s house and saw he had a copy on his extensive bookshelves, and he mentioned that I was the only other person he’s ever met who’d also read it. And this is a guy who’s worked in bookstores and done rare book dealing, so he’s not exactly bibliographically sheltered.

A funny thing I’ve also noticed as I’ve been spending time with some favorite books during the ongoing quarantine is that, in addition to mostly being aimed at young adults, most deal in some way with isolation or escape to some degree. The Wonderful Flight To The Mushroom Planet ticks the young adult box, but doesn’t exactly deal with isolation, although it does take place over a weeklong Easter holiday when its two principal characters, the young boys David Topman and Chuck Masterson, are out of school, and while they’re just starting their vacation they’re probably bound for boredom and in need of a project. David’s father finds an intriguing ad in the paper, printed in green ink:

WANTED: A small space ship about eight feet long, built by a boy, or two boys between the ages of eight and eleven. The ship should be sturdy and well made, and should be of materials found at hand…An adventure and a chance to do a good deed await the boys who build the best space ship.

David’s mother helpfully snips it out of the paper for David to carry in his pocket and the next day the two boys, with some scrap metal and wood supplied by Chuck’s sea captain uncle, start building their spaceship in a secluded cove on the California coast. Oh yeah, and behind all this is a mysterious scientist named Mr. Bass, who lives in a house topped with an enormous telescope, and he’s discovered a previously unknown satellite orbiting Earth, closer and smaller than the Moon, which he named Basidium. He doesn’t just have the plans but also the means to send David and Chuck to Basidium and back because he’s a fun guy, and, yes, that’s a terrible pun, and, yes, I’m proud of it.

Mr. Bass is one of those supernaturally wise characters you find in some young adult literature, a perfect mentor, but it works–he gives Chuck and David just what they need, and he’s a funny contrast to the other adults in the book who are pretty much clueless.

There are some clear autobiographical elements to it: Cameron had a son named David, and lived in Pacific Grove, California, which adds to the realism. It’s an imaginative work but it’s not hard to guess that even Basidium, with its cool mossy landscape dotted with mushrooms the size of trees, has more than a bit of coastal California in it. Cameron also wrote the largely autobiographical Julia Redfern series.

She followed The Wonderful Flight To The Mushroom Planet two years later with Stowaway To The Mushroom Planet, and it’s one of those rare cases where the sequel is just as inspired and as good as the original. It turns out you can go home again, at least once. She followed that up with three more books that are, well, disappointing. It’s kind of a downer, I know. Her son David was ten when the first book was published; he was fourteen by the time the third book was published, but the fictional David and Chuck don’t age. The later books also get into some terrible pseudoscience, trying to explain how the tiny planetoid Basidium can have a breathable atmosphere, and the origins of its inhabitants.

The thing is, though, the first two books are still fun, and there’s always a new generation to read them because they keep popping up like, you know, mushrooms.