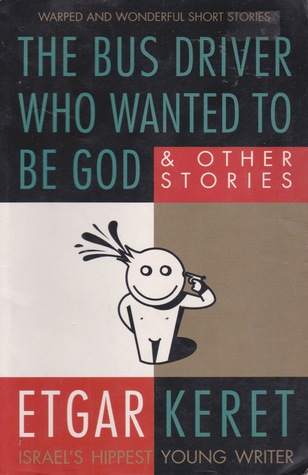 Have I mentioned that I really love short stories? That’s not a rhetorical question. I really can’t remember. I have the memory of a goldfish. At least I think I do. I think I heard once that goldfish have a three second memory, but I can’t remember where I heard that so it might not be true. Anyway I love short stories and I especially love flash fiction—usually defined as stories that are less than two thousand words. I even think flash fiction is my own preferred genre for writing, although I often find that the shorter I try to make a story the longer it ends up being, but that’s another story. Or rather another stories.

Anyway one of the contemporary masters of flash fiction is Etgar Keret, whose stories typically range in length from two or three to five or six pages, but within their compact size they deal with heavy issues: love, marriage, infidelity, life, death. It’s tempting to use the old cliché “deceptively simple” but there’s nothing deceptive about them. When a story opens with a man perched on a high ledge about to jump you know that, no matter how short it is, it’s a big moment. That, I think, is the beauty of well-crafted flash fiction: it reminds us that our stories don’t have to be epic to be important; every moment of every life is a story, and every story matters. In the title story of Keret’s collection The Bus Driver Who Wanted To Be God the bus driver, who wanted to be God but is happy because being a bus driver was his second choice, has had a career of terrible efficiency, has a sudden moment of compassion. How long does it last? Does it ever happen again? The story doesn’t say—and in the end it doesn’t matter. The point is that a bus driver who’s rigidly stuck to his schedule sees someone who needs him to stop, to take an extra few minutes.

Admittedly the bulk of this short story collection is taken up with the very long story Kneller’s Happy Campers, which became the basis for the movie Wristcutters: A Love Story, but even the long story is broken up into brief encounters between people and how those encounters change them, how their lives, or, more accurately, afterlives, are driven by moments of connection.

These moments are a recurring theme in Keret’s short stories, which can also be weird, even surreal—like a guy who works in a factory making long, twisting pipes and discovers that things disappear into it and never come out the other end, so he crawls in to see where it goes. And sometimes the twists are both poignant and hilarious. The best story in this collection, one of Keret’s best stories overall, is Breaking The Pig, about a kid who wants a Bart Simpson doll. His father decides this is an opportunity to teach his son the value of money, “So instead of a Bart Simpson doll he bought me an ugly china pig with a flat hole in its back.” The kid starts to fill the piggy bank but in the process comes to love it, even naming it Pesachson. When Pesachson is full the father hands the kid a hammer and says, “Go on, then, break the pig.” The kid gets understandably upset that he’s being asked to smash his best friend, and begs his father to let it go one more day.

I won’t give away the ending. I’ll just say that it’s funny and surprising but also completely believable, as well as sad, and completely unforgettable.