Pedal To The Barrel.

Freethinkers Anonymous > Adventures In Busing. > Pedal To The Barrel. 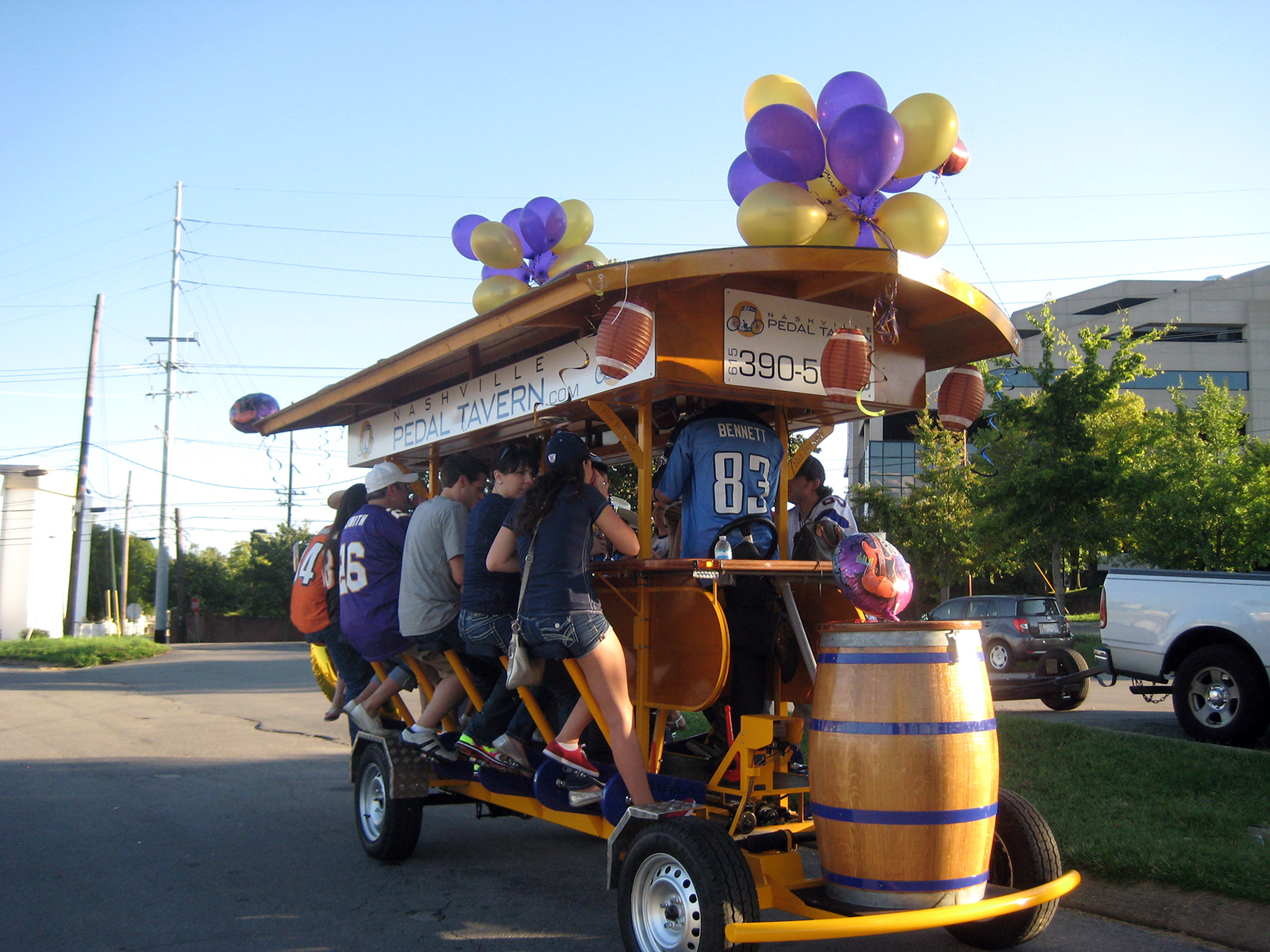 Starting in September Nashville will start allowing “transpotainment” vehicles, which were shut down in July, to roam the streets again, and I know enough to know that means the infamous pedal taverns that, for some reason, roam the streets around the neighborhood where I work. If you’re unfamiliar pedal taverns are sort of rolling bars, a contraption that looks more like a trolley where people sit along the sides and power the vehicle with their feet while drinking. And while for some reason I assumed pedal taverns would just serve beer they’re apparently fully loaded and, from what I’ve seen, the riders are too. Once when I was just out taking a break from work, ambling down a quiet alley, a pedal tavern came up behind me and all the guys on it—they were all guys—started yelling, “Uh oh! Stranger danger!” because I guess they thought I was some kind of threat even though I wasn’t the one pedaling around drunk at two in the afternoon. Another time my wife and I were in the car—she’d just picked me up at work and we were going somewhere–and we got stuck behind another pedal tavern, and I mean stuck. The tavern was trying to go uphill and the riders were having a little trouble with it.

Supposedly the person in charge of driving the pedal tavern—or rather steering since technically the riders provide the power—is supposed to stay sober, and I say supposedly because the only reason I can think of for them to find their way into the neighborhood around my office would be if the navigator was drunk. Downtown would be the natural environment for pedal taverns where the streets are already clogged with tourists and the streets are fairly level close to the waterfront. Around where I work it’s more hilly and the cars move faster. There also aren’t that many interesting landmarks around, although maybe I’m wrong for thinking most pedal taverners are tourists looking to take in the sights. Maybe they’re tired of the honky tonks and saloons of, well, downtown, and are looking to spread out while taking the honky tonk with them.

It’s not that I have a problem with consuming adult beverages. I like a drink as much as the next guy—if the next guy happens to be Dylan Thomas. I just think consumption should be savored, and that takes attention. You can roll out the barrel but do you really want to drink from it while it’s still rolling? Pedal taverns just seem like too many different things wrapped up together to be enjoyable. I can walk and chew gum at the same time but I prefer to do it after the gum has lost its flavor, which usually happens even before I stick it to the bedpost overnight, but that’s another story. A friend of mine took a walking tour of Scotland which included stops at distilleries for a tipple or two of their finest single malts along the way, but the important thing is she stopped before drinking. Imagine sampling whiskey while you were walking the rolling hills of thistle and heather. Even with only a bit of a buzz you’d forget whether you were on the high road or the low road and maybe if you were even in Scotland.

I don’t want to harsh anyone’s mellow, and I know people are looking to get out and do things. If you think transpotainment is entertainment that’s great. Pedal taverns have been shut down in Nashville for a staggering less than two months and I’m sure doing vodka shots on your stationary bike just isn’t the same. I just think taverns should stay where they belong.