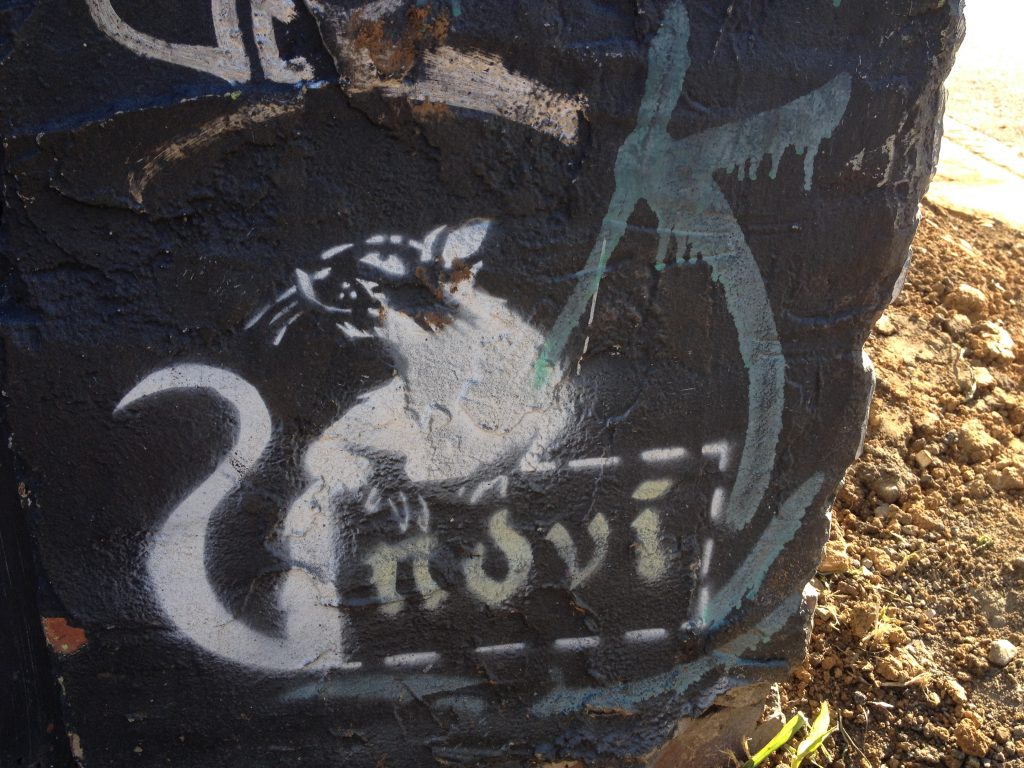 Animals pop up regularly in Edgar Allan Poe’s stories. There are rats in The Pit And The Pendulum, the orangutan in The Murders In The Rue Morgue, a gold bug in, well, The Gold Bug and deathwatch beetles in The Tell-Tale Heart, and a horse in Metzengerstein. Poe’s famous raven was, in an early draft, an owl, and in The System of Dr. Tarr and Prof. Fether there’s a woman who thinks she’s a “chicken-cock” and I never want to see that on a KFC menu, but that’s another story.

And then there’s The Black Cat. It’s the first Poe story I ever read, and I distinctly remember sitting in the school library giggling like a fiend not because it was funny–it’s not–but because it was just so over the top gory and horrifying I couldn’t believe it.

It’s the ultimate Poe story, really, drawing not just on animals but other themes from his work: someone sealed in a wall, as well as a narrator who tries to shut off his violent impulses, repressing them until they erupt. There’s no moral, no message, no point really. The narrator barely makes an attempt to justify his actions and clearly feels no remorse, because, as Stephen Peithman says in The Annotated Tales of Edgar Allan Poe, “the narrator sees everything in terms of black or white There is no middle ground.” He’s done evil things and therefore can’t see himself as anything but an evil person.

Maybe there is something to it, though. At the beginning of the story the narrator and his wife have acquired “birds, gold-fish, a fine dog, rabbits, a small monkey, and a cat”. The cat’s name is Pluto and the narrator says he’s “sagacious to an astonishing degree”. Poe almost always uses the word “sagacious” ironically but here it seems to be sincere. Pluto’s a smart cat and his reward for it is the narrator cuts out one of his eyes then hangs him. The narrator’s house burns and even though the cat itself was cut down and thrown through the house’s window during the fire an after-image of a hanged cat is left imprinted on the wall.

Or is it? Supposedly others see it but we’re not exactly dealing with a guy whose word can be trusted here.

He and his wife get another cat–this one also missing an eye, and also black, but with a white mark on its chest. And the mark changes.

The reader will remember that this mark, although large, had been originally very indefinite; but, by slow degrees — degrees nearly imperceptible, and which for a long time my Reason struggled to reject as fanciful — it had, at length, assumed a rigorous distinctness of outline. It was now the representation of an object that I shudder to name — and for this, above all, I loathed, and dreaded, and would have rid myself of the monster had I dared — it was now, I say, the image of a hideous — of a ghastly thing — of the GALLOWS ! — oh, mournful and terrible engine of Horror and of Crime — of Agony and of Death !

I’ll let you look up a picture of a gallows if you want but let’s just say it seems a little too specific and elaborate to be a mark you’d see in an animal’s fur. It seems pretty obvious the narrator is projecting.

Or maybe that’s just what Poe wants us to see. Or what I think Poe wants us to see. Who can really say? When I was in fifth grade–just a few years before I read The Black Cat for the first time a kid brought a Ouija board to school. On a bright sunny fall day we convinced ourselves we were communicating with the spirits of the dead. There was a fence behind the school and woods beyond it, and that afternoon we all saw a face in a distant tree. One girl even said it winked at her, and I’m giggling like a fiend here because to this day I firmly believe we were only seeing what we wanted to see.