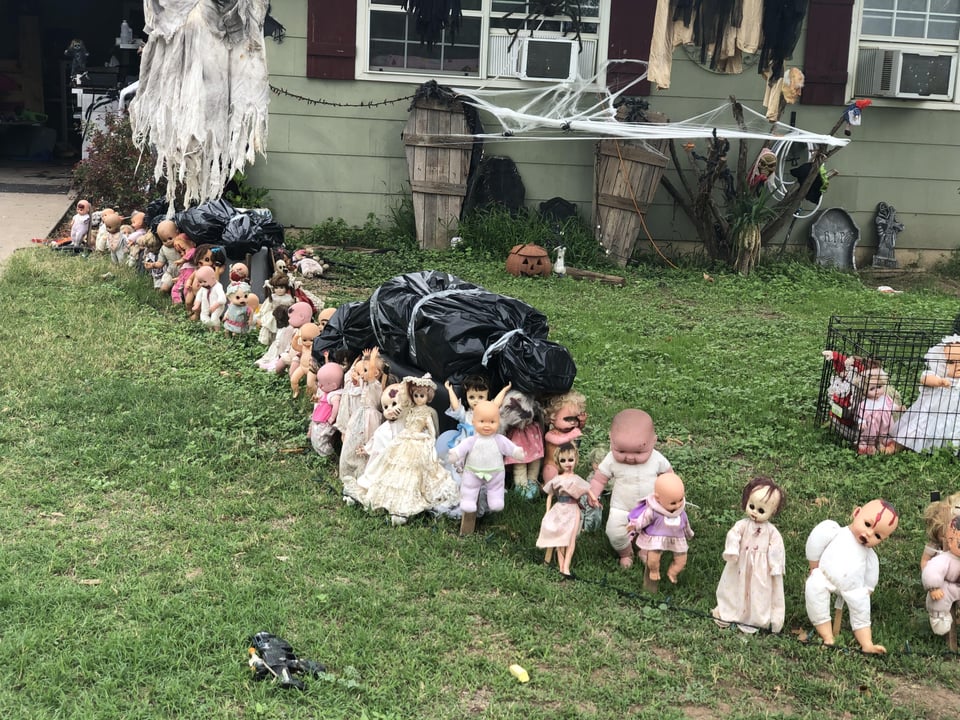 The picture of dolls carrying corpses that popped up on Reddit late last month—that’s right: someone put this display in their yard in September at the latest, getting the jump on Halloween—is so brilliant I don’t know where to start with it. Of course it’s creepy and disturbing but then dolls are creepy and disturbing already. So many have the uncanny valley thing going on and I remember being seriously unsettled by those dolls whose eyes pop open when they sit up and close when they lie down because I couldn’t stop thinking, do they die if they never sit up again? And I thought that might not be so bad if it meant not looking into those cold, lifeless eyes ever again.

Maybe that’s why scary dolls are a horror film cliché, from 1929’s The Great Gabbo through The Twilight Zone‘s Talky Tina, who still creeps me out as an adult because she looks like one of those dead-eyed dolls from my childhood, up through Chucky and Annabelle.

All of them, I think, owe a little something to the original scary doll story. If you’re only familiar with Disney’s Pinocchio it can’t prepare you for just how bonkers Carlo Collodi’s late 19th-century novel The Adventures of Pinocchio is. The two have more or less the same plot but the novel is darker and more rambling. Geppetto’s a poor woodcarver and decides he’ll make a little money by carving a puppet, but the block of wood he’s using is alive–it talks and bashes him in the legs before he even starts carving, which should have been a sign to throw that log in the fireplace. There’s a talking cricket but after Pinocchio smashes him with a hammer he comes back as a ghost and is then reincarnated, but never with a top hat or an umbrella. There’s also a fairy but she has blue hair–I guess that was too radical for the 1940s so Disney made her blonde with a blue dress. In the novel she first appears when Pinocchio is being chased through the woods by the Fox and the Cat, and does nothing while they throw a rope around his neck and leave him hanging from a tree. That was where Collodi planned to end the story, so be good kids and sleep well! Just remember–one wrong move and you’re dead!

Collodi was convinced to, ahem, finish the story and he more than doubled the length, including some scenes that made it to the film, like Pinocchio turning into a donkey and later, restored to his puppet self, being swallowed by The Terrible Dogfish–Disney turned it into a whale, referencing the story of Jonah which I guess they considered more believable–and scenes that didn’t, like Pinocchio being thrown in jail, working as a watchdog, and accidentally giving a dragon a heart attack.

It all ends happily, of course, with Pinocchio, through hard work and concern for others finally becoming a real boy. Is that a happy ending, though? He’s been through about three years of pretty demented adventures without ever getting older, but as a real boy he’s going to grow old and eventually die. That’ll probably keep him up at night.