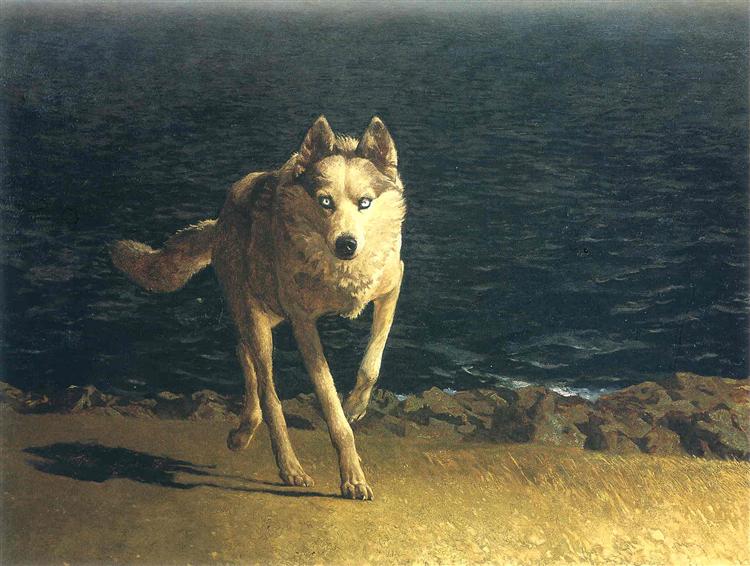 There used to be a large stretch of woods near our house, between us and the interstate. It had once been farmland but as suburbs grew up in the area trees grew up over the are and it became a small area of wilderness. It was all cut down to be turned into a shopping center. The downside of that is a lot of wildlife—deer, coyotes, possums, skunks, raccoons—moved to the suburbs. Where we live. The upside of that is it changed the bus route so that, when I was riding the bus to and from work, my walk was shortened and just a straight line. I’d rather have the wilderness back and have to zigzag through side streets on my way and from the bus. Technically I could still zigzag through side streets—my old bus stop is still there, but the shorter route saved a lot of time. And then there was the dog.

Late in the year, as the days get shorter, I’d come home in the dark. Most of the time it was kind of relaxing. I’d walk by homes with windows glowing warmly, and it wasn’t really dark because of the streetlights. At the crest of a hill, though, the streetlight had gone out, and I was coming up it I heard growling and the tick of dog’s claws on the asphalt. I could just make out the silhouette and the greenish eyes of a large dog there in the darkness. Most people keep their dogs in their homes or yards. This one, I guess, had escaped and was roaming freely, and I was in its territory. I froze, not sure whether I could safely back up or make a big enough circle around the dog that I wouldn’t pose a threat. We stood there for what seemed like days but was probably just minutes because it was still dark when some guy walked out to check his mailbox. The dog turned its attention to him.

“Hey,” I heard the guy say, a slight note of panic in his voice. “Hey dog, what are you doing out?”

At this point I could say I helped or maybe I could say something about the thin veneer of civilization, but instead I’ll just tell a joke. There are two guys out in the African veldt photographing a lion. The lion notices them and starts to get up. One of the guys bends down and puts on a pair of running shoes.

“You don’t think you’re going to outrun a lion, do you?” says the other guy.

The first guy says, “Forget the lion. I just need to outrun you.”

I’m pretty sure the guy getting his mail was okay. With the dog’s attention focused on him I was able to get by and head home but I still had a pretty long way to go, and I didn’t hear anything.