Because Star Wars came out when I was a kid I collected all the toys. And I mean all the toys. My parents were pretty generous in indulging my obsession with everything Star Wars-related so Christmases were big and predictable. I had the Death Star playset. I had the Millennium Falcon. Amazingly I had Boba Fett’s Slave 1, something no other kid I knew had—most of them were amazed it even existed. And I had all the action figures. So of course when I saw this I laughed for an hour: 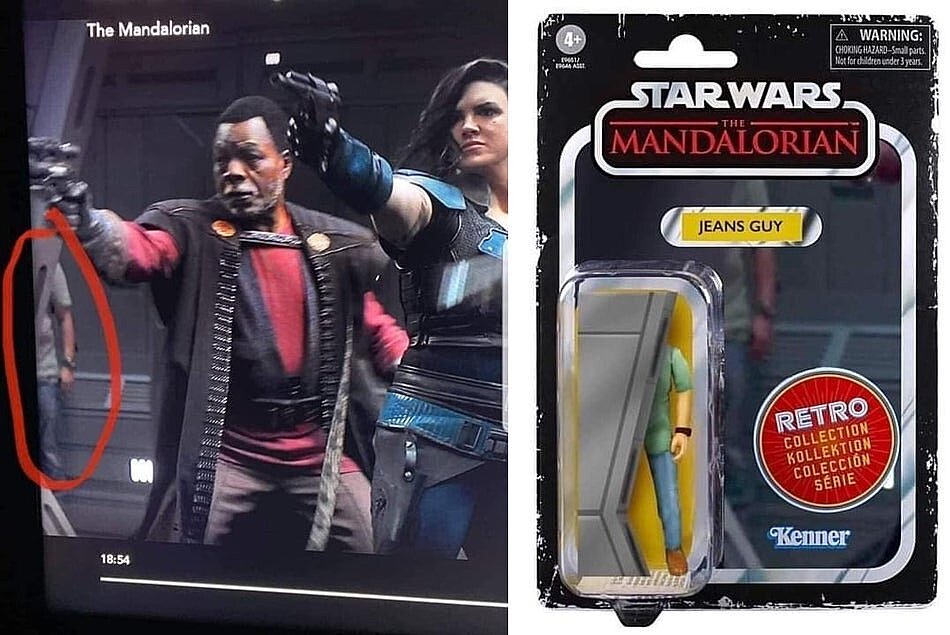 And then because my brain can’t leave things alone I started thinking about it. I haven’t seen The Mandalorian—I’ve matured to obsessing about other things, but this stayed with me. For one thing I thought how, even when the original Star Wars came out if there had been flaws like this in it most of us wouldn’t have noticed them because, no matter how obsessive we were, we still had to see it in the theater. We couldn’t pause, rewind, or watch it again—unless we could stay in the theater, and most of us had to go home.

Jeans Guy has been digitally erased now and I’m kind of sorry he’s gone. A lot of work goes into making any show or movie—and I’m speaking from a very little bit of experience here. One summer when I was in college I helped on the production of a documentary about a local homeless shelter. Mostly I carried gear but I also operated sound equipment and got a chance to learn a little about editing. It was an extremely low budget documentary so the work that went into that was nothing compared to what must go into making an FX-heavy science fiction drama.

And no matter how good special effects get we still have to willingly suspend disbelief and it’s not a bad thing to have the occasional reminder—to borrow a line from another show’s theme song, repeat to yourself it’s just a show, I should really just relax. Some directors have even put deliberate “mistakes” in their films to remind us that we’re watching something artificially constructed. For example there’s a scene in Haskell Wexler’s Medium Cool in which a mic dips down into view. It looks like a mistake but was probably intentional.

These mistakes can even be inspiring. Like the toys that allowed me to create my own Star Wars stories a mistake can make a film more “real”, more tangible–some special effects artists have said that seeing how the effects on screen were created, realizing that was a job, helped them find a career they love. It’s probably a stretch to say Jeans Guy is living the dream, but at least he’s probably working in a field he’s really passionate about.

I sold all my Star Wars toys and assorted paraphernalia a few years ago, but now I really do want a Jeans Guy action figure.