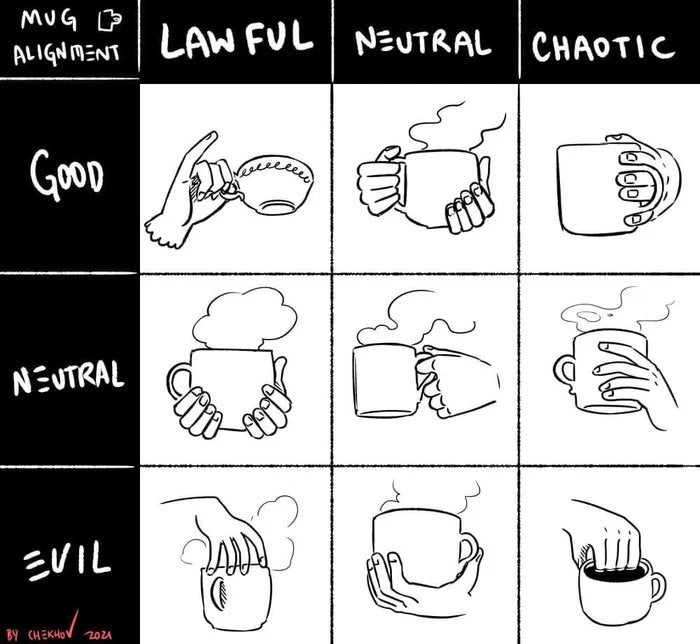 According to the Mug Alignment chart I’m Chaotic Neutral, not because of my personality or anything, but because I’m left-handed. And that’s more important than anything else when it comes to how you hold your mug even though most mug designers don’t think about. I know most people aren’t southpaws but, hey, nobody’s perfect. The problem with coffee mug design was something I first noticed when I was a kid and got a coffee cup that said “I Love My Springer Spaniel”. At the time I didn’t drink coffee but I did have a Springer Spaniel named Friskie and I loved her—in fact I still have that coffee cup, but I keep it at work because it might offend our Dalmatians, but that’s another story.

When I did start drinking coffee in college I’d sometimes use that cup and because I’d hold the handle with my left hand the part with “I Love My Springer Spaniel” faced outward. Some people told me I was holding my coffee cup “the wrong way,” although those were the same kinds of people who, when I was young, would tell me I was holding my pencil in the wrong hand. Hey, you do you, but my brain is wired so left is right. And I thought it made sense that the picture should be facing out. I knew I loved my Springer Spaniel, but other people didn’t. It was meant to be a conversation starter. If you’re drinking coffee in a public place or even a semi-public place like a dining hall or breakroom wouldn’t you want a funny message or picture to be facing out so other people would see it? Sure, some people are introverts and aren’t looking to start conversations but those people are unlikely to be drinking their coffee in public or semi-public places anyway.

Here’s another example—a coffee mug from the now defunct JJ’s Coffee Shop that I got back when it was still funct, and their excellent brews were a real trip to Functy Town. Here’s the obverse side:

And here’s the reverse:

The ICC stands for “Integrity, Confidence, Consistency”, the motto of the owner of JJ’s, which is also printed along the bottom of the mug—although I got it for free because the guy who made it accidentally printed “Itegrity” on it because I’m pretty confident he wasn’t consistent about his spelling. Anyway it bugs me that when I hold it the JJ’s logo faces me, although I usually don’t carry it out in public or even semi-public so I’m not starting any conversations.

What I’m really getting at is that most coffee cups are designed for right-handers but they shouldn’t be. Ideally coffee cups should be made with reversible handles. Obviously this isn’t easy and will require a great deal of engineering skill and thought—otherwise someone would have done it already.

Or, you know, they could just put the picture or message or whatever on both sides.