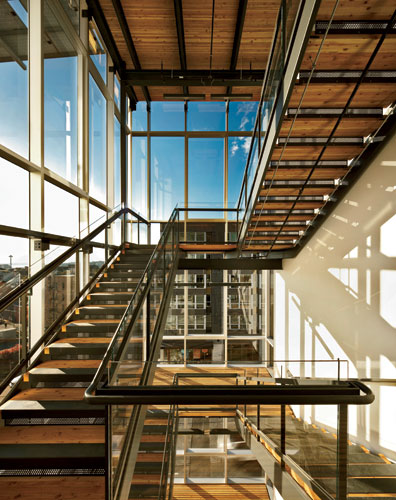 I went to pick up a prescription which feels kind of like practice for when I eventually go back to work because the garage where we park for work just happens to be across the street from the same place where I pick up most of my prescriptions. And on the ride there I was listening to an episode of The Hidden Brain about The Bullitt Center in Seattle that has what its designers describe as “the irresistible staircase” which encourages people to take the stairs with an inviting wood design and great views of the city. They even say the best views in the building are from the stairs, and that people have spontaneous meetings on the stairs which allow them to be more productive in their work.

And, yeah, I’m gonna be that guy who points out that not everyone can take the stairs so those people are missing out on the advantage of spontaneous meetings, among other things. I also thought about how I regularly took the stairs at the office where I work, and I might have missed out on some spontaneous meetings, but I also got the advantage of the exercise which is why I did it even though the staircase in the building where I work is terrible. It’s completely enclosed and cold and for years the doors into the stairwell were locked from the inside so once you were in there the only way out was to go to the ground floor, and the ground floor stairwell door was locked from the outside. It seems like that would be a violation of the fire code but—this is absolutely true—one day when I was taking the elevator for a change I heard the building manager tell someone, “You can do whatever you want if you pay the inspector enough.” For a while I also had a coworker who was in a wheelchair and once when we all had to go to the basement because of a tornado she had to literally be carried down the stairs, which seemed pretty stupid to me, and probably to her too. I understand that the elevators shut down for most people in the event of an emergency but they should still be an option, at least for a short time, for people who can’t take the stairs and need to get out of the building in a hurry, especially if you have an office manager who’s violating the fire codes anyway.

Anyway when I got to the parking garage I parked on the top floor and took the stairs down and then going back up. I was a little out of breath on the way back up which reminded me I need to take the stairs more often, or at least just get more exercise, but the good part is I was completely alone on the stairs and didn’t have any spontaneous meetings.