Several years ago I had a tank full of goldfish in my office at work, and because goldfish have almost no memory I had to hear them telling that “I have no idea how to drive this” joke about every three seconds. Supposedly watching fish in an aquarium can lower your blood pressure, and it was also nice to have something to look at because my office has no windows, although I was also reminded that the work that goes into maintaining an aquarium raises blood pressure. And it didn’t help when the filter stopped working one weekend when I was gone and when I came in on Monday I had more dead goldfish than a carnival ring toss game.

One of the nice things about working from home is I do have a window and for my birthday my wife got me a bird feeder because supposedly watching birds can also lower your blood pressure, and a bird feeder is a lot easier to maintain than an aquarium although I did feel my blood pressure going up a little when no birds came by for several days after I put it up and I thought, hey, what am I, chopped liver? And then I started wondering if I birds would come around if I put chopped liver in the feeder instead of safflower seed, but then a tufted titmouse came to the feeder—a bird I had to identify with my wife’s bird book because, with a few exceptions, I don’t know most birds from Shinola, even though Shinola doesn’t fly, but that’s another story. That also reminds me that my wife and I have a running debate about the birds we see flying around big parking lots. I think they’re seagulls because, well, they look and sound exactly like the seagulls I see at the beach. She says they’re just gulls because we’re nowhere near the sea, but I say we get a lot of tourists from Florida, and besides New Wave rock wouldn’t be nearly as exciting if we just ran away from a flock of gulls.

Here’s a completely gratuitous picture of a pair of great tits: 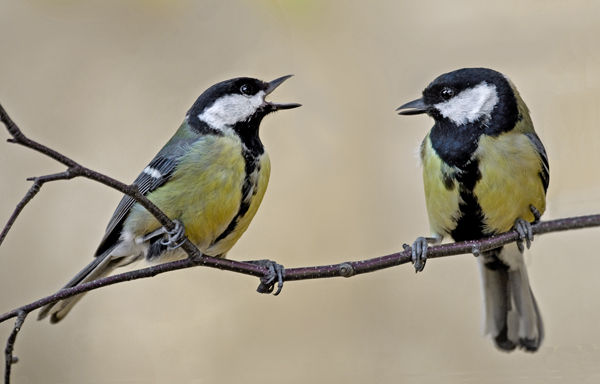 I’ve gotten to know other birds not just from their looks but their behavior. The tufted titmouse and chickadee will fly up to the feeder one at a time, grab a seed, and fly away. House finches will come to the feeder in pairs, usually a male and female, and they’ll sit on the feeder for a few minutes and eat several seeds, and then the female will yell, “YOU’VE HAD ENOUGH, LARRY, GO MINGLE!” and chase the male away. Then there’s the Carolina wren that gets down into the bird feeder and throw seed all around and looks at me and says, “Is this all ya got?” And even though it’s a small feeder I’ve had a female cardinal, and a red-bellied woodpecker who’s at least three times bigger than the other birds and hangs off the feeder looking for chopped liver.

I put safflower seed in the feeder because squirrels don’t like it but no one’s told the squirrels that and I’ve had two come around regularly. I haven’t got anything against the squirrels but it is a bird feeder and when they park their furry butts in it most birds stay away, although I have seen the Carolina wren dive at a squirrel yelling, “YOU’VE HAD ENOUGH, KEVIN, GO CLIMB A TREE!”

Eventually I’m going to have to go back to work and I’ll lose my window so I’ll have to find some other way to keep my blood pressure down. Maybe I’ll get another tank full of goldfish and teach them to drive it.