Me with Ozzie, the mascot of the Nashville Sounds, and a couple of the players. Not gonna lie. Ozzie was the best part.

So there’s a big sporting event coming up this weekend which I keep forgetting about. It’s not that I don’t love sports. It’s just that I don’t love sports. Sure, I do enjoy watching baseball, and also I really love billiards, and billiards matches have been shown on ESPN so that officially makes it a sport. Then again hemorrhoids commercials have also been on ESPN and I don’t think those qualify as a sport, but, hey, if you enjoy it go for it. I’m also the leader in my local fantasy croquet league, but that’s another story.

This did get me thinking about my favorite part of any sporting event: the mascot. Actually most major events—football, whether American or what the rest of the world calls football—basketball, even golf don’t have mascots, and you can’t tell me golf wouldn’t be greatly improved by an oversized character dancing around the links. It also got me wondering about the origins of mascots generally. The term originally meant “A person or thing that is supposed to bring good luck” and  apparently comes from a French operetta, La Mascotte, about a young woman who is “la Mascotte”, a person with the magical power to grant luck as long as she remains a virgin—so she’s the only one who can’t get lucky.

Most early sports mascots were animals, a tradition that continues in the names of many sports teams from the Seattle Seahawks to the Tampa Bay Rays, although the Rays’ mascot is inexplicably a big purple hairy thing named Raymond when they could potentially have the coolest mascot ever in the form of a stingray. Several years ago I went to a Rays game with my parents and had a great time—the Rays won—and I thought it was a great thing that Tropicana Field not only has a stingray tank but the stingrays have the best view of the field.

Fortunately the rays also have a net to protect them from foul balls hit by the Rays.

There was also Ozzie, the cougar mascot for the Nashville Sounds, who followed the giant baseball headed Homer Horsehide and who was followed by Booster, a rooster mascot.

And then there’s Gritty, mascot for the Philadelphia Flyers, who’s been described as frightening and an “acid trip of a mascot” which is my favorite description ever. 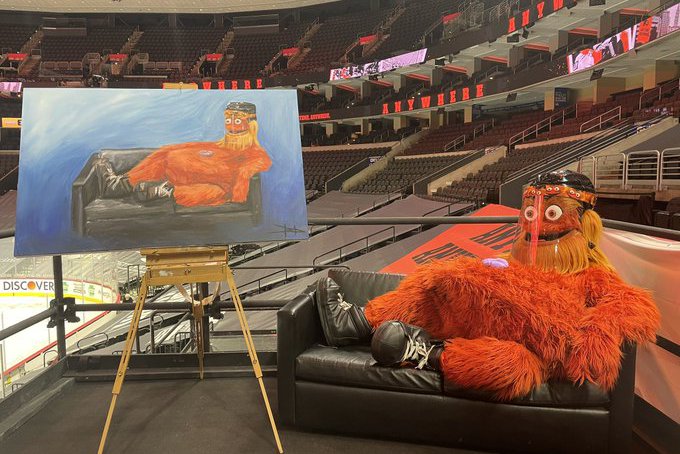 All this just makes me think how much I’d like to be a mascot, to don an oversized costume and get up to some antics. Mascots are fun and add to the entertainment of any game and maybe they even really do bring some luck, and who doesn’t love that?