Pie In The Sky.

Freethinkers Anonymous > Not Non-Fiction > Pie In The Sky.

Not Non-Fiction, Ramble With Me., The Weekly Essay 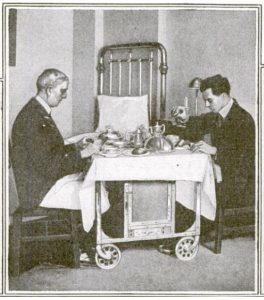 “Pizza Is a Healthier Breakfast Than Cereal, According to a Nutritionist”–Health.com

Welcome to another episode of Mouth Of America! This week we’ll be enjoying some of the different styles of cereal around the country. First we’ll head to New York, best known for its thin style of serving up Raisin Bran, usually on plates instead of bowls. Paper plates are great and can conveniently be folded in half for easy carrying when you’re strolling around the five boroughs, although they don’t hold milk too well.

Next we’re off to Chicago for their famous deep bowl cereal style, often served up with heavy cream and requiring an extra large spoon. Few things go better with a Bears game than a big bowl of shredded wheat topped with a hot, gooey layer of melted sugar.

As long as we’re in the Midwest let’s also stop to take in Detroit style cereal. The legacy of John Harvey Kellogg, inventor of corn flakes, still reigns here with his traditional cereal  served up in square or rectangular bowls, and for some reason they also put butter on it.

Right next door of course is Wisconsin, America’s dairyland, which explains why corn flakes are also popular here and also why instead of milk they use cottage cheese. That’s…interesting. Let’s move on.

Down South cereals lean more toward the dried fruit and whole nut end of the aisle with puffed rice also a popular choice. South Carolina style cereal is especially well known for its vinegar and mustard based toppings and seriously what is wrong with people?

Now we head back to the middle of the country for some of the famous St. Louis cereal and molasses I can understand but why for the love of all that is holy are they putting tomato sauce on it.

Just a little to the north is Iowa where the most popular cereal is corn. Just corn. Raw corn on the cob. In a bowl.

Let’s move on. You don’t have to jet across the Pacific to enjoy Hawaiian style cereal which has become popular across the country. Adding pineapple to your cereal doesn’t sound so bad. Oh, please tell me you didn’t just put ham in a bowl of Cocoa Puffs. I think I’m going to be sick.

Finally it’s off to California for, oh, no, wait, we’re going to the Pacific Northwest for Seattle-style and, yep, I was afraid of that, they’re putting fish on it.

Well, that’s all for our tour of the cereal styles of America, and I’m only going to say because I’m contractually obligated to read the script that cereal is good food no matter how you slice it.