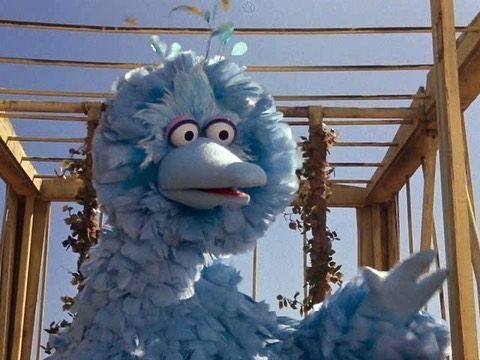 The artist Alex Da Corte is putting Big Bird on the roof of the Metropolitan Museum of Art in New York where he’ll stay from April 16th through October 31st. Strictly speaking it’s a sculpture of Big Bird, painted blue, which is a nod to Big Bird’s Venezuelan cousin, who’s named Garibaldo. Da Corte was born in the United States but his father is Venezuelan and Da Corte spent several years of his childhood there. Big Bird also has a blue cousin in The Netherlands named Pino, and in the 1985 film Follow That Bird Big Bird is captured by a circus, caged, dyed blue, and forced to sing as “The Bluebird of Happiness”.

It’s weird to me to think that I’m part of the first generation to literally grow up with The Muppets. From The Muppet Show and Sesame Street through so many movies and spinoffs and appearances—Oscar The Grouch even once came to a church some friends and I were going to for a weeklong Vacation Bible School when I was five—that it’s hard to know what to say about them, or about Da Corte’s sculpture, other than that I absolutely love it and wish I could see it in person. Talking about The Muppets is like talking about Greek myths. More specifically it’s like talking about Greek myths in, say, 400 B.C. Jim Henson—the Muppet Homer, if you follow my metaphor—is long gone but the stories are still very much alive, very much part of our current cultural fabric.

Maybe that’s partly because the Muppets are such a reflection of who we are. They don’t look human—most of them aren’t even supposed to be human; they’re frogs and pigs and bears and dogs and rats and shrimps and whatever the hell Gonzo is supposed to be. (Yes, I know, he’s an alien.) That’s the thing, though: we can project ourselves onto the Muppets because, like us, they come in a wide range of shapes, sizes, colors, and personalities. And they’ve been brought to life by a wide range of very talented performers who, though they’ve mostly stayed behind the scenes, projected themselves through the characters. Carol Spinney, who played Big Bird—who, you could even say, was Big Bird, told a funny story about Jim Henson moving the Ernie puppet out of the way.

Ernie was on the floor, right where Henson needed to stand.
‘So he kicked it to the side,’ remembers Spinney. ‘After the scene I picked Ernie up and said, “Are you alright after that bad man just kicked you?”‘
As Spinney recalls, Henson replied, ‘Oh that’s funny, are you sentimental about the puppets?’
‘I said, “Well yeah, they’re kind of real to me,” while Henson said, “To me they’re just tools.”

Yeah, if you grew up watching Sesame Street and the Muppets that might seem pretty dark, but the Muppets are alive because of the people behind them, which is also why we can project ourselves onto them.

Da Corte’s sculpture, by the way, gives Big Bird a ladder, giving him the power to climb even higher, and he’s perched on a crescent moon in imitation of Donna Summer. The title of the sculpture is As Long As The Sun Lasts, taken from an Italo Calvino short story. So there’s a lot of cultural layering here, but at the heart of it is Big Bird, which reminds me of something a friend said when the Muppets, who were on SNL in its early years, returned with Jason Segel in 2011: “It doesn’t matter who you are, whose show it is, or what else is going on. When you’re with the Muppets they’re the stars.”