Submitted For Your Approval., The Weekly Essay 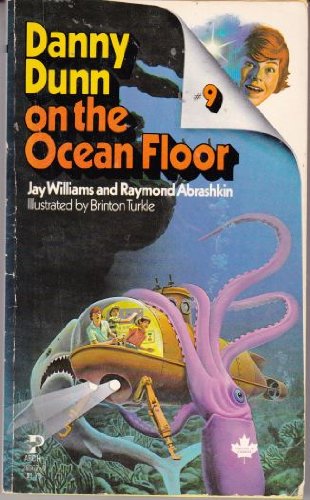 Source: Amazon.com. Reprinted as #9 this book was the fifth published in the series. Go figure.

When I was a kid my mother started me on the Danny Dunn books. They’re not as well known as The Hardy Boys or Nancy Drew books, but when I started on them I still wanted to be a marine biologist and I was interested in science in general, and, being light science fiction, the Danny Dunn series was fun. There are fifteen in all, and I read a little over half of them when I was young. This summer I thought I’d go back and reread the ones I knew and read the rest while I was at it.

The books are set in the fictional town of Midston, somewhere in New England, and aimed at young adults and follow the adventures of Danny Dunn, a ten or eleven year old who’s being raised by his single mother–his father died sometime when Danny was young. Danny isn’t a boy genius–he’s an ordinary kid with a strong interest in science. This interest is encouraged by Professor Euclid Bullfinch, who’s hired Danny’s mother as a live-in housekeeper. Professor Bullfinch is kind of a vague polymath whose skills include engineering, physics, and chemistry. He encourages Danny’s interest in science. Danny has a friend, Joe Pearson, who’s an aspiring poet. This balance of science and art is nice–Joe can’t always follow Danny’s explanations and Danny’s sometimes amazed by Joe’s ability to rhyme. The third book introduces another friend, Irene Miller, who, like Danny, wants to be a scientist—specifically a physicist, although in Danny Dunn And The Smallifying Machine she considers switching to entomology. And having a strong, interesting, female character is a pretty cool thing for a series that started in 1956. What’s even more interesting is Irene’s interest in science is rarely treated as anything unusual; it’s not until the sixth book in the series, Danny Dunn And The Fossil Cave, that a friend of Professor Bullfinch’s assumes Irene isn’t interested in science. She politely corrects him, he apologizes, and they move on. And one of the books, Danny Dunn And The Automatic House, introduces a four-year old named Emmett who wears a bowler hat and his father’s Navy sweater, and speaks his own made up language. In today’s terms we’d probably recognize Emmett as being on the autism spectrum. Unfortunately Emmett only plays a part in one book, with his special ability to make high-pitched noises playing a crucial role, but it’s cool that everyone around him just lets him be his own person at a time when it was widely believed that autism was something that needed to be “cured”. 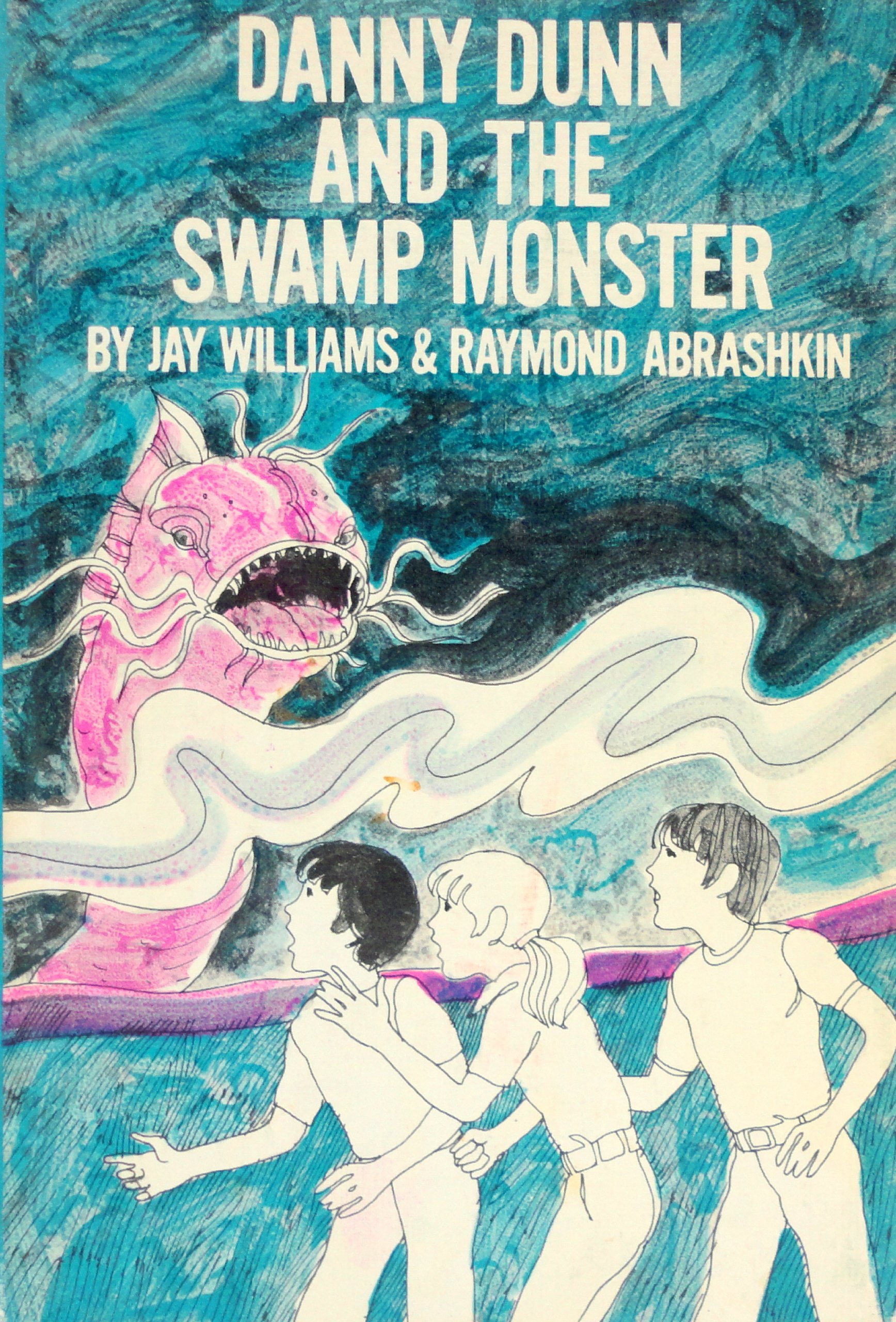 Source: Amazon.com. I had a copy with this same cover I found at a garage sale.

The series was started by Raymond Abrashkin and Jay Williams, an interesting pair of guys. Abrashkin was a film director best known for his 1953 film The Little Fugitive, about a kid named Joey who runs away from home to spend a day at Coney Island. The film Williams has a cameo in The Little Fugitive as Jay the Pony Ride Man, and was also a successful writer for kids and adults. Abrashkin and Williams started the Danny Dunn books in 1956 with Danny Dunny And The Anti-Gravity Paint, and kept at it until 1960, between Danny Dunn And The Weather Machine and Danny Dunn On The Ocean Floor, when Abrashkin, who had ALS, passed away. Williams, apparently out of respect for his friend and collaborator, insisted that Abrashkin be listed as co-writer on all fifteen books. Although not as popular as some other children’s series the books were popular enough to be reprinted for decades, and Danny Dunn And The Homework Machine would be adapted into a musical album, unfortunately with songs so treacly you could lose a tooth just listening to it.

Aside from the introduction of Irene the books are completely non-sequential and self-contained so it’s possible to start with any one in the series, although reading them in order I couldn’t help noticing that another character, Dr. Grimes, who’s a friend and occasional sparring partner of Professor Bullfinch, has a major part for the last time in The Ocean Floor, only returning briefly six books later when he rescues Danny, Joe, Irene, and Professor Bullfinch who’ve been shrunk to less than an inch high. In fact I realized too late that the books really aren’t meant to be read in sequence, or even in a batch. Doing so sets up an expectation that the final book, Danny Dunn And The Universal Glue, published just a year before Williams died at the age of 64, will be bigger than the others. It does address contemporary issues of pollution and chemical waste after an industrial plant drains a swamp and its runoff threatens the town dam. Professor Bullfinch’s new glue, named Irenium after Irene figures out how to contain it, is used to seal up the dam and prevent a disastrous flood. I don’t know if it was intentional but this does seem like a callback to the first book in which Joe mentions an attempt by Danny to build a hydroelectric generator and ends up flooding a bunch of houses upstream. Maybe Williams knew he was at the end. The final book isn’t a grand finale but there is a sense of closure. 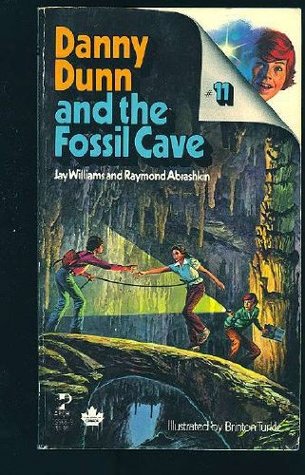 Source: Goodreads.com. Actually one of the better Danny Dunn books. I read this one straight through in church one Sunday.

It’s also pretty obvious that, for stories supposedly grounded in science, Abrashkin and Williams didn’t let facts get in their way. Professor Bullfinch builds amazing high-tech gadgets by himself in his home laboratory, often with materials he’s cooked up himself, sometimes with a little help from Danny who has a tendency to start fires or cause accidents that lead to surprising breakthroughs and that’s not how science works, and in a few cases Professor Bullfinch doesn’t even know how the devices he’s built work and that’s really not how science works. Sometimes, though, you just have to suspend disbelief. Is it plausible that Professor Bullfinch, cooking up some chemicals in his laboratory, would just happen to make a super-strong, super-light plastic and use it to coat a submarine then fly Danny and his friends to Mexico where they’d get stuck in the depths of the Pacific Ocean only to find a long lost Aztec treasure? Definitely not, but it’s a fun story. Would it be possible for a new superconducting polymer to stop a knife-wielding bad guy if it were hooked up to a twenty-five foot amphibious electric catfish found only along the Nile River in Sudan? I wouldn’t know where to begin with how much is wrong with that if I weren’t so willingly going along for the ride. Could readers willingly accept that a scientist would build a miniature drone in the form of a dragonfly and the military would try to seize it and use it to spy on American citizens? Well, yeah, actually that one seems pretty believable, but the important thing is the Danny Dunn books are mostly light, escapist fantasy, and what more could you want from summer reading?