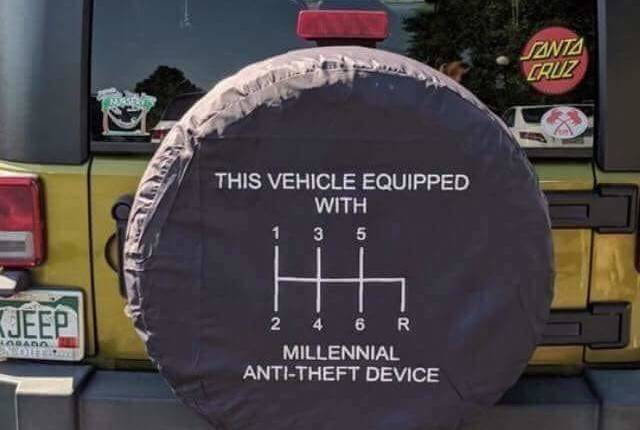 I’m not a fan of millennial-bashing or bashing any generation. Singling out a group of people who happened to be born within a certain time frame and assuming they all share similar characteristics seems singularly stupid to me which, I know, is totally something one of us Gen Xers would say.

Anyway I can’t drive a stick-shift. Well, I probably could but with a lot of trouble. Manual transmissions were still widely used when I came of age but never covered in my driver’s ed class and I was okay with that. I’m still okay with that. I still don’t get the appeal of driving a stick-shift vehicle. Almost everyone I’ve known who had one told me, “It gives me more control of the vehicle.” That’s the problem, as far as I’m concerned. I’m one of those people for whom a car is just a way to get from one place to another and while I enjoy the journey I want it to be as carefree and easy as possible. Starts and stops, turns, lane changes, and other drivers are all more than enough for me to concentrate on while I’m driving and even on long empty stretches there are things to think about like, am I going the right way? or would German vanity plates stretch halfway around the car?  I don’t need to have to worry about pushing in the clutch and shifting from second to third in the middle of highway traffic. 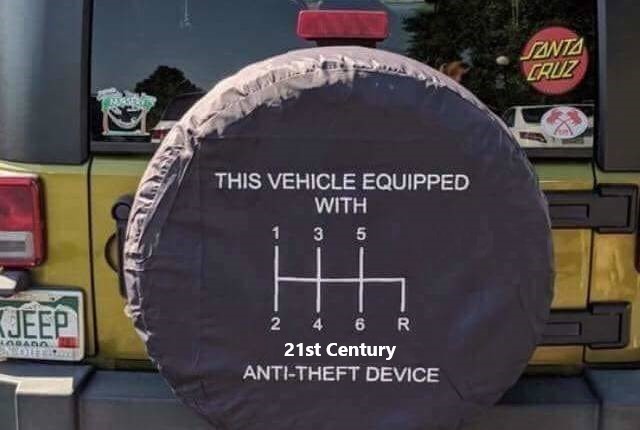 Same source but much more accurate.

A friend once did try to teach me to drive her stick-shift pickup truck. We were on some back roads early on a Thursday morning and she thought that would be a good time and place to teach me this important life skill that, honestly, I’ve never needed and probably never will. She was a good teacher too—patient and giving clear directions, but every time I tried to shift gears the engine made a noise like a chainsaw going through a full orchestra. I’d shut it off and restart, until the third try when it wouldn’t restart. We switched seats so she could take over and it still wouldn’t start. We waited a few minutes. Then we waited a few more minutes. Finally we gave up and walked to her house which, fortunately, wasn’t that far away. A few hours later her husband came home. He walked down to the pickup to see if he could figure out what the problem was and it started for him on the first try. There’s something to think about.