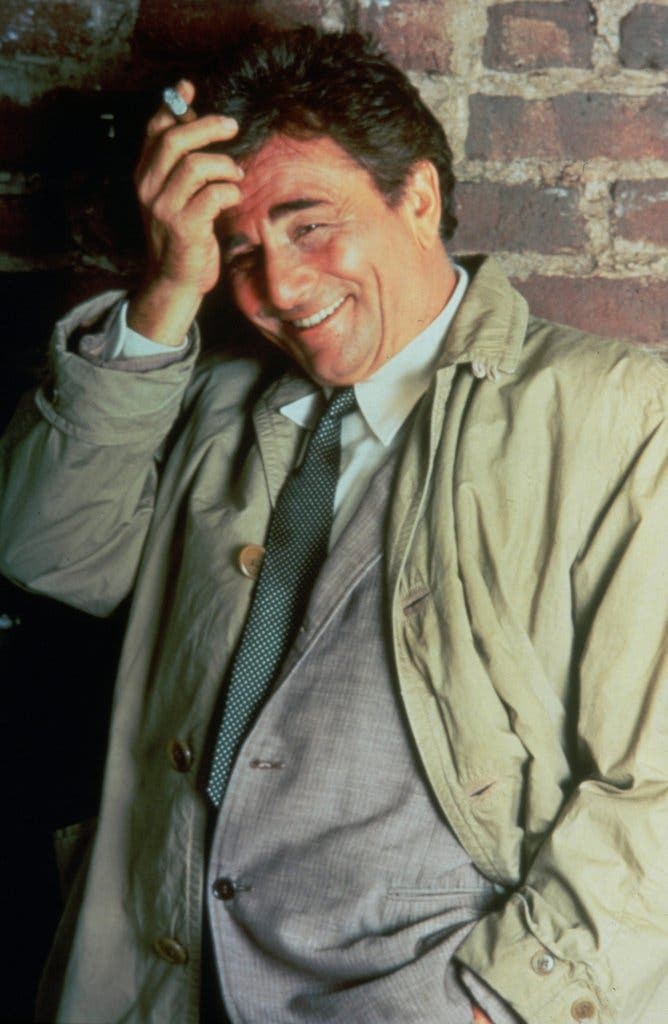 There’s been a major revival of interest in the detective series Columbo, and since I’ve been a fan ever since I was a kid and discovered late night reruns watching my black and white TV in my bedroom, and since September 16, 2021 would be Peter Falk’s 94th birthday let’s talk about it and why the possibility of a reboot needs to die. Right now. Even if I have to kill it myself.

What hooked me from the very beginning, and why I still love Columbo, is really Peter Falk’s charm. He was rarely angry and had a quiet, unassuming demeanor that set him apart from other detectives of the era, which is also why I think he’s still popular today. Other ‘70’s detectives—Kojack, Rockford, McCloud!—were darker and grittier and, well, there’s a lot of that around, which may be why they don’t get as much attention. It’s telling that one of the other exceptions, Murder, She Wrote, is also getting a new surge in popularity, with its stories of a mystery writer who lives in the quaint New England town of Cabot Cove where the leading cause of death is living in Cabot Cove, maybe because Angela Lansbury is also the woman who put Sweeney Todd’s customers in pies, but that’s another story.

There’s also Columbo’s appearance. He spends most of his time in a shabby raincoat and smoking cigars, although at least once he switched to cigarettes and coffee when he was up all night doing research. Some people point to the show’s fashions as being very ‘70’s, but some of the same looks are still around today. I think it’s more a sign of when it was made that Columbo could smoke indoors and there was an ashtray every three feet. He’s also different in that he pretends to be absent-minded, wandering around, frequently talking about his wife, whom we never see, and, as an aside, I’m going to say Kate Mulgrew deserved better. And got it, first in space, then behind bars.

The fact that we never see Mrs. Columbo has spawned a fan theory that she doesn’t exist, which is funny, but the evidence doesn’t back it up. Other people in the series also talk about her and, once, she tries to replace Columbo’s trademark gray raincoat with a bright yellow slicker that he “forgets” and leaves behind several times.

And while Peter Falk became a producer, working hard on the show behind the scenes, Columbo deliberately makes himself small, staying out of the way, often hunched over. Even the show itself frequently makes use of long shots in big rooms or outdoors, making Columbo appear even smaller. When asked what his first name is he only says, “Lieutenant,” although sharp-eyed fans know his first name is Frank, from one of the few times he flashes his badge.

The show also has a not so subtle anti-establishment streak, which I think is a product of its time but also part of the show’s ongoing appeal. Most of his suspects are wealthy, powerful people, and though there’s always a deeper motive—a fear of losing their wealth or their position, mainly—they still feel they can get away with murder, and it’s satisfying to see them get taken down. In spite of that Columbo does seem to like, or at least respect, some of the suspects he trailed. In “Any Old Port In A Storm”, when the murderer is a high-class winemaker played by Donald Pleasance,  Columbo seems to enjoy showing off his newfound knowledge of wine. Drinking while on duty—and, let’s face it, Columbo is always on duty, even when he’s on vacation—may be a violation, but in every other respect Columbo stays well above the law. And, okay, he goes out drinking again in “The Conspirators”, when he joins the Irish poet (and IRA sympathizer) Joe Devlin, and tries to impress him by reciting some limericks, including “The Pelican”:

A rare old bird is the pelican.
His bill holds more than his belly can.
He can take in his beak
enough food for a week.
I’m damned if I know how the hell he can!

And then there’s “Swan Song” in which the murderer is played by Johnny Cash, who starts with a good performance of “I Saw The Light” and ends with him being arrested for sending his wife down in a plane crash. But what also makes the episode memorable is how Cash and Falk have such natural onscreen chemistry, complimenting and complementing each other, that it’s not hard to believe actor and singer hung out together after the filming.

Even in “Murder Under Glass”, which is notable for being one of the few times Columbo comes out and says he dislikes his suspect, a professional food critic, but still wants to impress him with veal scallopini a la Columbo.

I’ve been using all this to lead up to why I want to kill a proposed reboot. I don’t think there’s anything wrong with reboots in general—I even think some have been great—but, while Sherlock Holmes, Miss Marple, and even Sam Spade, among other famous detectives, have been played by other people, and while Peter Falk didn’t originate the role, he made it his own. It’s hard to imagine the producers originally wanted Bing Crosby, and I just can’t picture Columbo as a blue-eyed sophisticate standing over a corpse crooning, “Bet she was a beautiful baby, buh buh buh…”

It’s because of Peter Falk that Columbo makes such effective use of the inverted detective story in which we know from the beginning who the murderer is and how they did it. How the detective unravels the mystery is supposed to be what draws us in, although, really, it’s just the pleasure of hanging out with Columbo for an hour or two.

What would a reboot look like? Even the innumerable Law & Order clones that have firmly planted the idea that most crimes are committed by the special guest star look ridiculous when we have darker, more complicated dramas like Broadchurch and The Sinner that explore how crimes don’t happen in a vacuum and are never really resolved, especially after just an hour. 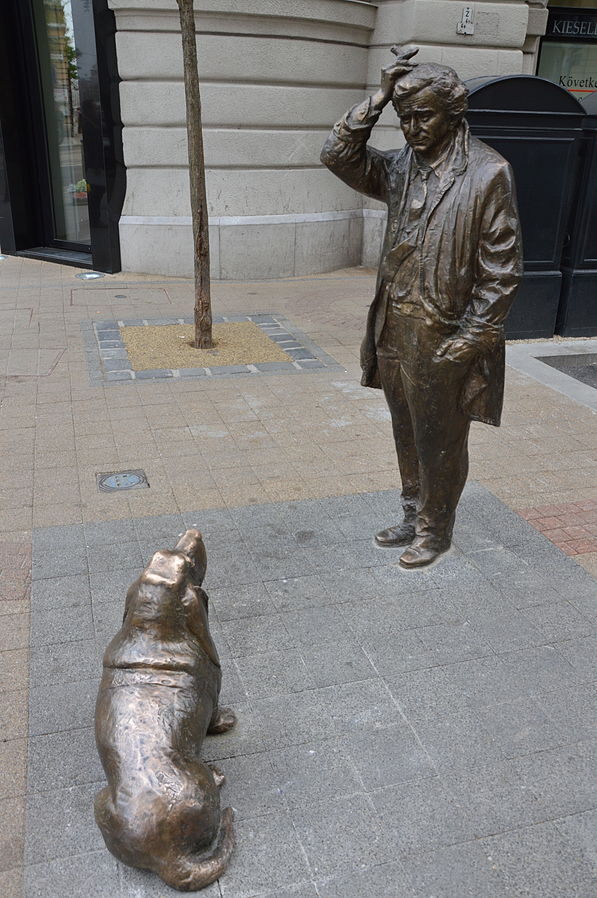 And let’s not forget that part of the appeal of Columbo is that it’s always funny, or at least tongue-in-cheek. The murders may be serious but Columbo isn’t. He drives a broken down Peugeot, and occasionally brings along his Basset hound named “Dog”—I’m pretty sure Mrs. Columbo has given their pet a more elegant name. Columbo and Dog both are immortalized in a funny statue in, of all places, Budapest. Columbo even has his own amusing theme song, “This Old Man”, which he occasionally whistles to himself. Outside of Columbo Peter Falk is best known for comedic roles–the grandfather in The Princess Bride, opposite Alan Arkin in The In-Laws, and an aging performer in a made-for-TV remake of Neil Simon’s The Sunshine Boys.

The show also sometimes really strains credibility with Columbo picking up on farfetched clues like a pair of not sweaty socks, or an episode like “Troubled Waters”. While it’s a great story with a great cast that includes Robert Vaughn and Dean Stockwell, what are the odds someone would commit a murder on the same cruise ship where a great detective just happened to be taking a vacation?

A reboot would almost certainly heighten the comedy, but then it would be too much like the MAD Magazine parody “Clodumbo”, where the punchline is that twenty-seven innocent people have turned themselves in just to get away from the detective pestering them.

Columbo himself says it best at the end of the best episode, “The Bye-Bye Sky High IQ Murder Case”, when he’s asked if he’d ever consider another line of work. ““Me, sir? No. Never. I couldn’t do that.”

Let that be one last thing.