Another Brick In The Wall.

Freethinkers Anonymous > American Graffiti. > Another Brick In The Wall.

The interesting thing about The Cask Of Amontillado is that in the final lines Montressor reveals the story he’s just told happened fifty years earlier. His telling is so vivid, so immediate it’s like it just happened, but Fortunato’s been rotting in his basement for half a century.

Maybe it’s that vividness that makes it one of Poe’s most popular stories–it’s one I think is most used to introduce kids to Poe, along with The Tell-Tale Heart and The Black Cat, although, in summary, it sounds more like a story for college students: two guys meet up in the middle of Mardi Gras, one says, “Hey, I’ve got a keg of some pretty sweet wine in my basement. You in, bruh?” The other says, “Hells yeah!” and, well, maybe the “college” part drops off there. I remember some pretty wild parties when I was a student but only a few ended with somebody chained up and sealed behind a brick wall.

Maybe it’s the desire for revenge that makes it so popular, but what makes it fascinating to me is that it’s also apparently a deathbed confession. Poe never tells us how old Montressor and Fortunato are, but Montressor seems to live alone while Fortunato has a wife. At the very least they’re in their late twenties which means by the time he’s telling the story Montressor is pushing eighty. Unlike the narrator of The Tell-Tale Heart who can’t keep his yap shut for a few hours Montressor has held his secret for half a century. 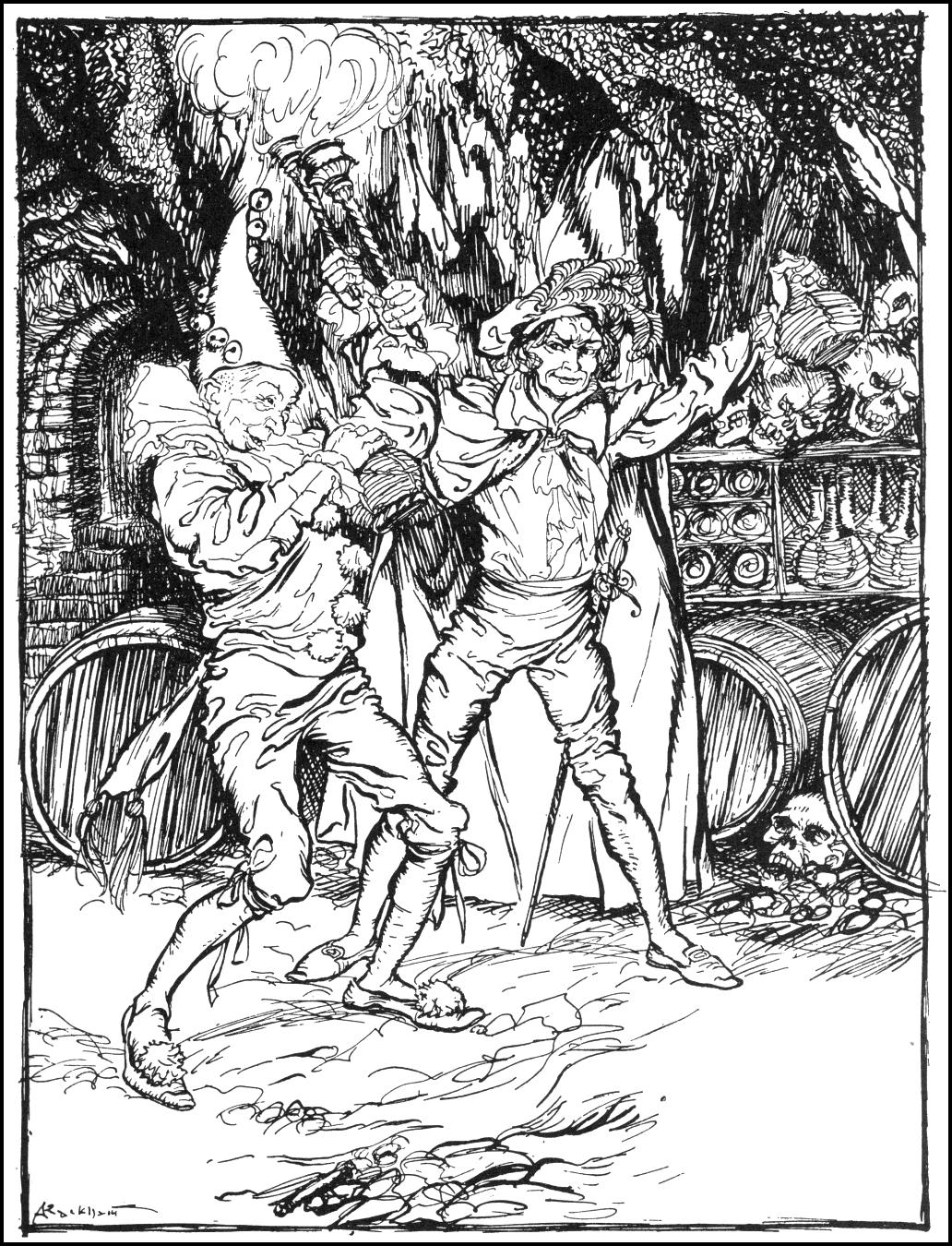 It’s also not exactly a confession; Montressor seems really pleased with himself for having borne the “thousand injuries” from Fortunato and only seeking revenge for an “insult”.

What did Fortunato do wrong, anyway? That’s one of literature’s unsolved mysteries, and it’s also the weirdest thing about the story’s end. Fortunato knows something is up, he knows he’s being slowly put to death, and yet he never tries to talk his way out of it. He never even asks, “What did I do?” Of course we’re only getting Montressor’s version of events and, as unreliable narrators go, he’s one of the unreliablest.

Poe generally hated allegory and symbolism (The Masque Of The Red Death was an exception) but he was fascinated by chemistry and even alchemy (The Gold Bug is just one example) and I’m going to throw out an idea based on that. The nitre that covers the walls of the Montressor family catacomb is potassium nitrate, which is a fertilizer–the ancestors aren’t the only thing pushing up daisies. It’s also a lung irritant. Fortunato already seems to have a bad cold and even if Montressor hadn’t left him down there he probably shortened his friend’s life anyway.

It’s also an ingredient in gunpowder.

Is there some alchemy going on here? Fortunato, with his outgoing nature and multi-colored outfit, could be sulfur, Montressor, all in black, is carbon, and once you add the potassium nitrate they’re an explosive combination.

I know it’s a stretch but Poe also loved irony and misdirection, and it would be just like him to set up this story to end not with a bang but a whimper.