Adventures In Busing., The Weekly Essay 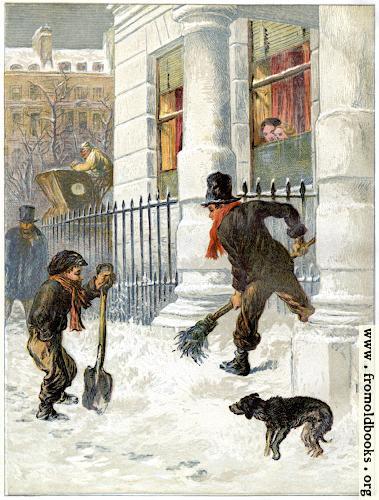 A white Christmas never meant that much to me as a kid. I liked snow, and still like it—when it comes to weather I’ll gladly take snow over torrential rains, thunderstorms, and tornadoes, even if I do live in a place where the mere threat of snow causes everyone to stock up on bread, eggs, and milk as though French toast is some kind of magical survival food, and cars go sliding up and down the streets and into ditches because no one here knows how to drive in the snow. Granted I said that once to someone who lives in a place that gets lots of snow and she said, “Well, what they should do is wait until the snowplows have cleared the streets because the trick to driving in the snow is you don’t try to drive in the snow.” And I just laughed at the thought that there are places that get snow on such a regular basis that they actually have snowplows that go out and clear the streets.

What I really looked forward to at Christmas, aside from the presents and food and all the TV specials, was two weeks off from school. For me what made the holidays was an actual holiday—a break from having to learn stuff. I could read books without having to worry about being tested on what I’d read which somehow made whatever I was reading a lot more interesting and more memorable. All our other school holidays—Thanksgiving, Easter, the occasional teachers’ work day when they’d have to go in but we didn’t—lasted only days. Christmas was a solid two weeks. It was like a brief burst of summer, only right in the middle of winter. Getting snow at Christmas would have been a mixed blessing. It would look nice but one of the benefits of whatever snow we did get, which usually came in late January or February, was that we’d get time off from school. Snow at Christmas would have just taunted us with the fact that we were already free.

It was two days before the start of the Christmas break and we were in the midst of final exams. Having final exams right before Christmas seemed cruel, forcing us to jump over a major hurdle when our minds were already focused on the bacchanalia to come, and yet having exams after Christmas, which I’ve heard some places do, would have been even worse because we’d have to sweat and study in the midst of the bacchanalia. At one point I suggested that we really should be tested at the beginning of the year, the idea of education being to teach us what we didn’t know, and it made sense given my mind’s perverse ability to mostly remember stuff I didn’t have to remember, but the idea didn’t go over so well with my teachers.

Anyway there we were, late December, hunched over our desks and checking the skies between classes because there was a chance of snow in the forecast. And, as usual, there was some dipstick sitting in the very back who’d occasionally yell “It’s snowing!” and everyone would jump and look out the windows, although, really, you could do that in the middle of May and everyone would still jump and look out the windows, and maybe they’d be even more interested because snow in May would really be something.

So as I was saying I was in the very back hoping the weather would hold off. Irving Berlin’s “White Christmas” gets played so often against a backdrop of snowscapes that it’s easy to forget that he wrote it in warm, sunny southern California where they’d never be able to get the snowplows out because nobody’d know how to drive the damn things. He was dreaming of a white Christmas but to me it sounded like a nightmare because school would be shut down and the rest of our exams would be delayed until after the holidays. It was, I think, the one and only time I sat in school wishing it wouldn’t snow.

And thankfully it didn’t. Not while school was in session, anyway. We finished up our exams and went home and a couple of days before Christmas it snowed. It wasn’t a heavy snowfall—not enough to disrupt anything, but just enough to lightly dust everything, giving life to an otherwise drab and gray winter. It was cold enough that the snow stayed powdery, swirling around the streets and in the air, but I distinctly remember that for breakfast that morning I had French toast.