Out With A Bang.

Freethinkers Anonymous > American Graffiti. > Out With A Bang. My earliest memory of New Year’s Eve being a big event was when I was eight or nine. My parents were out for the evening and I was at home with a babysitter. I don’t remember which babysitter, but I do remember that at some point she either turned on coverage of the party in New York’s Times Square or it just came on because at that time the TV only had five channels—the main three networks, PBS, and the local UHF station that subsisted on Elvis and Jerry Lewis movies and whatever reruns they could get for cheap.

What stuck with me was a commentator who pointed to the giant ball and yelled, “At exactly midnight that ball will drop!” He seemed really excited about it, as though it had never happened before and not an annual event that had been a tradition since 1907. I may be old but I’m not that old. Maybe it was his first time covering the event. Maybe he was a local guy who’d just gotten hired to do the news and was excited about that, although we were in Nashville so, if the ball drop were broadcast live, we’d see it happen at eleven p.m. local time, an hour before the new year started. That was okay with me, though; I think my parents were going to be home before midnight and I wanted to see the ball drop. And I thought it was really going to drop straight to the ground and shatter into a million pieces. It seemed like kind of a waste, and potentially dangerous, but I still thought that would be a really cool thing to see. When it just dropped several feet and stopped I was disappointed, and didn’t care that I was seeing it an hour before midnight and would be asleep by the time the old year officially rolled over into the new. 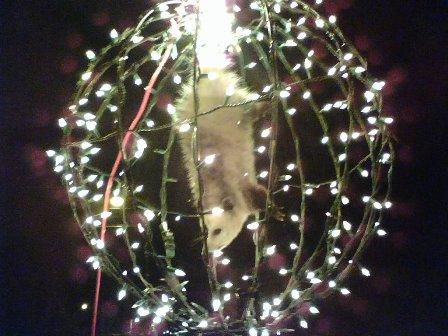 The New York Times ball was inspired by time balls which were historically used to signal to ships at sea, and a lot of other places have adopted similar traditions. Nashville had a giant guitar that dropped in front of the Hard Rock Cafe but that was changed to a musical note. And last year we had a bona fide explosion, although that was on Christmas, and I don’t think anyone wants to make it a tradition. Eastover, North Carolina drops a giant wooden flea, Havre de Grace, Maryland, drops a big duck, and both Chagrin Falls and Marion in Ohio drop giant popcorn balls. Pensacola, Florida, drops a giant pelican, and in Bartlesville, Oklahoma it’s a big olive, although I think Tallapoosa, Georgia takes the prize with a taxidermied roadkill possum named Spencer.

There are other odd ones but most places that have notable New Year’s drops just drop balls, which makes sense. The Earth is round and keeps spinning and moving along its elliptical orbit no matter how we mark the time. By the time the confetti and glitter are swept up the new year has become just the year, and the older I get the shorter the years seem to get, although a year is still a pretty long time. I’m not that old. So I’m not wishing anyone a happy new year. I’m wishing everyone a happy year.