Judge A Book By Its Cover.

Freethinkers Anonymous > American Graffiti. > Judge A Book By Its Cover. 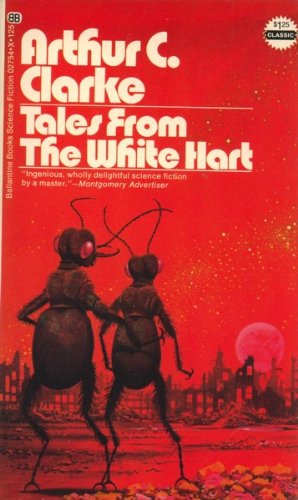 Several years ago a friend told me he had an idea for a series of science fiction stories set in and around a pub. And I said, “Oh, you mean like Arthur C. Clarke’s Tales From The White Hart?”

And he sighed and said, “I guess I should have known someone already had the same idea.”

Well, original ideas really are hard to come by, and since my friend hadn’t said anything more specific before I opened my fat mouth maybe what he had in mind wasn’t anything like Clarke’s book which is mostly set in a British pub called The White Hart and focus on a regular named Harry Purvis who tells stories of everything from a machine that can capture and replay sensory experiences to an accident just outside a nuclear power plant that’s not as bad as it sounds, most of which sound pretty questionable, but Harry assures the other pub regulars that the stories all really are true.

I felt bad for possibly shutting down my friend’s idea but I tried to reassure him that almost every writer has borrowed ideas, and that a creative retelling can be just as good as, if not better than, a really original idea. Heck, Clarke got the idea for Tales From The White Hart from the writer Lord Dunsany who wrote over a hundred and fifty stories about a man named Joseph Jorkens who regales members of his club with stories. Anyway if you want a truly original story you’re probably going to have to go back to the first humans squatting around campfires.

Some time later I bought a copy of Tales Of The White Hart in a used bookstore and sent it to my friend because I thought he’d enjoy it, and he did, but I also thought the cover,  was kind of funny because it had nothing to do with the book itself. I think the conversation at the publisher’s went something like this:

“All right, we need a cover for the Arthur C. Clarke book. You got anything?”

“Well, I’ve got this picture of two giant ants staring out over an apocalyptic landscape.”

“You got anything else?”

It’s a cliché that you shouldn’t judge a book by its cover but, come on, if that were true cover designers wouldn’t put so much effort into making interesting covers, and besides, how are you even going to know you want to read a book if you don’t look at the cover first?

Tales From The White Hart has had a lot of editions, some with better covers than others. Here are a couple of good ones: 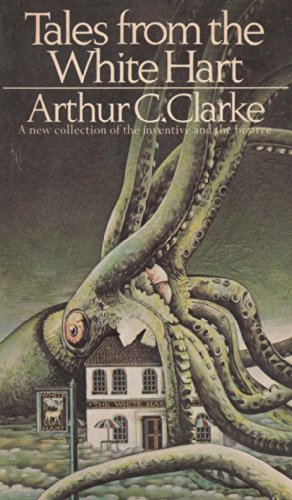 Good job, editor. Give the people what they want.