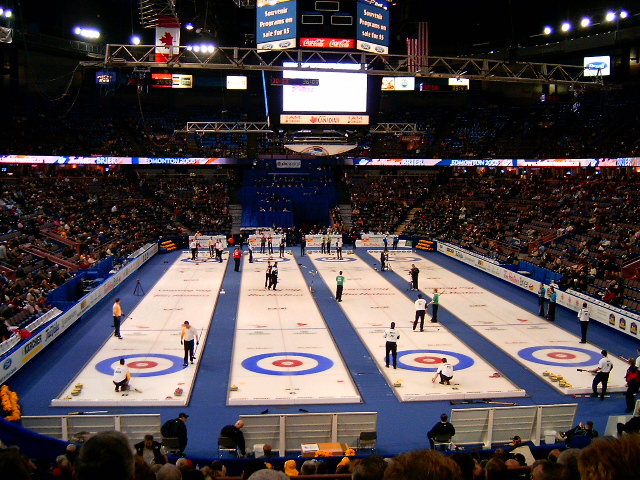 In just a few years Curling, which had its modern debut at the 1998 Winter Olympics in Nagano, Japan, after originally being part of the 1924 Winter Olympics, went from an obscure sport understood only by Canadians to a popular phenomenon with men’s teams, women’s teams, and mixed doubles teams playing in tournaments worldwide and still only understood by Canadians. With this remarkable success many Olympic watchers have been asking, what will be the next big breakout sport? The most obvious place to look is back at events that were once part of the Olympics but that have since been discontinued. Here are some of the top contenders:

Best described as “hockey with a ball” the game of Bandy is definitely one that’s been bandied about.

Already played as a demonstration sport at the 1952 Winter Olympics

Did I mention it’s similar to hockey?

Also known as “ski driving” Skijoring is, well, water-skiing on snow, with a single skier pulled by a horse, a dog team, or a motorized vehicle. It may be a speed race or may involve jumps and tricks.

This has a high degree of difficulty as the skier must maintain their balance while being pulled, which makes it exciting to watch.

It has a long history among the native Sami people of Norway.

The Summer Olympics have Equestrian events and this would be a good parallel.

The Olympics have kind of an image problem and horses, or even dogs, on snow and ice could potentially put the animals in danger

The motorized version is basically what your cousin Larry did in the backyard that one winter with a brick on the pedal of his go-kart and, well, your aunt complains about the doctor bills to this day.

It’s exactly what it says, but, unlike synchronized diving, Synchronized Skating can have teams of up to twenty people all working in unison.

That many people on ice working together has a big wow factor.

Similar events, although showier, are already often part of the opening ceremonies.

That many people on sharp blades on ice moving together seriously raises the odds that someone’s going to get cut and bleed all over the ice. Also a “pro”.

Ballet on skis. It’s the sort of thing you pretty much have to see.

No matter what you think of ballet it has an athletic quality, requiring both endurance and control.

Judging artistic events is subjective and therefore always controversial, and given the issues around ice skating it’s not surprising the IOC doesn’t want to add another one to the mix.

Also known as “snowshoe running” this is a speed event that involves running in shoes specially designed for crossing snow.

The difficulty can be appreciated by anyone who’s ever run, or just walked, in snow.

The World Snowshoe Federation has their own magazine. No, really!

Kind of at a loss here. Seriously, this is amazing. Even with specially designed shoes crossing snow at high speed is an impressive feat. The only con here is that Snowshoeing isn’t a major Olympic event.