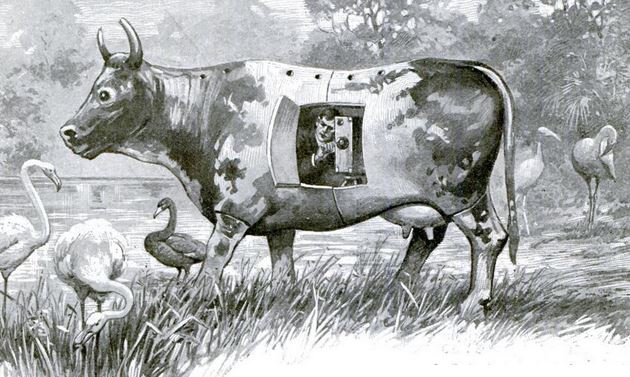 Whenever I see high school portrayed in TV shows or movies it never looks anything like my real experience. Not that I assume any other high school is anything like the one I went to. For that matter no one else’s experience even at my alma mater was the same as mine, even if they were there at the same time, and a lot of what I remember is filtered through what I’d like to forget and what I did forget because so many of the days ran together. But even when I was in high school the way high school was portrayed never quite seemed to get it right. Here are a few tropes that stand out for me:

It always gets me to see kids carrying around trays of test tubes and laboratory flasks, sitting at lab tables blending chemicals, using Bunsen burners, dissecting animals, and doing other science-looking stuff, usually while wearing fancy goggles. There was the biology room at one end of my school and the chemistry room at the other end. The only thing that differentiated them from all the other classrooms was one was used by the biology teacher and the other was used by the chemistry teacher.

In biology class we did dissect an earthworm, a cricket, a starfish, and a frog, and by “we” I mean a class of twenty-nine kids was divided into groups of four and we each got one specimen to dissect while the others stood around and took notes—and by “took notes” I mean “chewed gum and talked”, except for that one unlucky kid who didn’t get to dissect anything.

In chemistry class we did get to do some experiments where six of us would crowd around a table and use an eye-dropper to add tiny drops of liquid to tiny trays of chemicals. If I remember correctly the purpose of this was to demonstrate that if you add one chemical to another something might happen. The teacher did show us how if you put a piece of pure sodium the size of a grain of rice in a beaker of water: it fizzes and smokes, which seemed pretty cool even though we all had to stand at least ten feet away because the teacher was the only one who had a pair of goggles.

I get that these are often useful for building a narrative, especially ones where a kid from one group makes the crossover to another group, followed by confusion, chaos, growth, and a valuable lesson being learned by all. Maybe there are schools where there are clearly defined hierarchies and cliques, but mine wasn’t one of them. There were definitely groups, but mostly we were just a muddled mass. In art class I sat next to a kid named Sam who was definitely much cooler than I was and ran with a different crowd but we talked and laughed a lot because we were stuck next to each other for an hour a day. We didn’t talk much outside of class but we still nodded at each other in the hallways, and learning to get along with someone just because you don’t have a choice was good training for working in an office.

This is a less common trope but it still irks me because, well, twenty minutes after the election for class president and whatever the other offices were I couldn’t tell you who won, and twenty minutes before the election I doubt I could tell you who was running. I only remember the year my good friend Tony decided to run for class president, not because he had any ambitions or interest in politics, but just because he thought it would be fun. When it was his turn to give a candidate speech he stepped up the podium, let out a bloodcurdling scream that blew out the entire sound system, waited a minute while everyone recovered, then said, quietly, “Tension breaker. Had to be done.” The only other thing I remember is he lost.

-Every kid who fits the classic nerd type is smart.

High school stories don’t always rely on stereotypes, and by that I mean they acknowledge that jocks can be smart, but if you see a kid with thick-lensed horn-rimmed glasses wearing a button-down shirt and carrying a calculator you know he’s smart. Unless you’ve met Scott, who was in my class and who was a perpetual C student, not because he was super-intelligent and had mastered calculus in third grade, but because he just wasn’t that bright. At least he worked hard and I think he’s found his niche in middle management where all he has to do is sit behind a desk and look smart. The only thing he ever used the calculator for, as far as I know, was to show me how to use it to spell BOOBS.

-Everything rides on the big game.

Maybe for some kids it did but even for guys I knew who were on the football and basketball teams if they lost there was always another game next week that they could also lose.

First of all there was no drama club. The closest thing we had was the debate team which had a sub-group that would do dramatic interpretations. I went once because I was interested in that. The teacher said, “Here, work on this,” and gave me some xeroxed pages of a scene from The Odd Couple. Okay, I could be both Oscar and Felix, but was I supposed to mime their movements? Should I bring a pot of linguine to the next meeting? I never found out because the teacher left, everybody else was debating or chewing gum, and I never went back.

My senior year a few teachers did arrange a production of Oklahoma! which was pretty good and the kid who played Curly was really perfect for the part in every way except he couldn’t sing.

High school seemed so big and important at the time because, well, it was big and important. I think one thing that is true for most of us is that there will never be another time in our lives when so much about ourselves changes in such a short amount of time, when we go from the larval stage to, well, a very different larval stage. I look at how high school is portrayed in countless films and TV shows and think that, if, for the creators behind them, their high school was anything like that, I really missed out. Then I think maybe they did too. Maybe they’ve rewritten their past to be something it never really was.