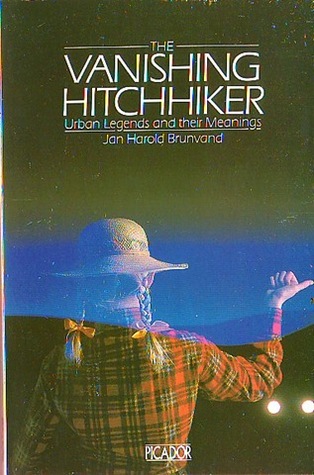 Every few years I reread Jan Harold Brunvand’s The Vanishing Hitchhiker because it’s a fun and enlightening look at urban legends, although I’m not sure the story of the vanishing hitchhiker qualifies as an “urban legend”. The usual version does sound like something people would repeat as an actual event but most of the time it seems to be told as a campfire ghost story. The pattern is always the same: a driver picks up a young woman on the side of the road. She asks to be taken to a house. When the driver gets there the woman has disappeared. The driver goes up to the house and is told the young woman died several years ago.

Supposedly the first recorded version dates from 1602 and involves a Dutch woman vanishing into thin air right in front of two farmers. I don’t know if people actually believed it, and I’ve found versions from east Tennessee printed in collections of folklore. Modern versions always put the driver in a car, of course, but some of the versions I’ve found date back far enough that the driver is in a horse-drawn wagon. Maybe some people have tried to pass it off as their own experience, or maybe people really have had something unusual happen while traveling. You never know what might happen when you pick up somebody on the side of the road, which is a good reason to be careful about whom you pick up.

Then there was the time I was on the bus, sitting right behind the doors that are in the middle of the bus that only open if you push on them. There was a young woman up near the front who got off and while she was still on the sidewalk next to the bus I heard her say, “Wait, this isn’t my stop!” She tapped on the middle doors and I leaned up and pushed them open so she could slip back in. She grinned at me then went to another seat.

All this took less than a minute and I don’t know if the driver noticed. I hope he didn’t. Unfortunately I got off the bus before we got to whatever the young woman’s stop was so I never did get to see the driver’s reaction when he saw her again, but I like to think he did a double-take.