A Matter Of Time.

Freethinkers Anonymous > Adventures In Busing. > A Matter Of Time. 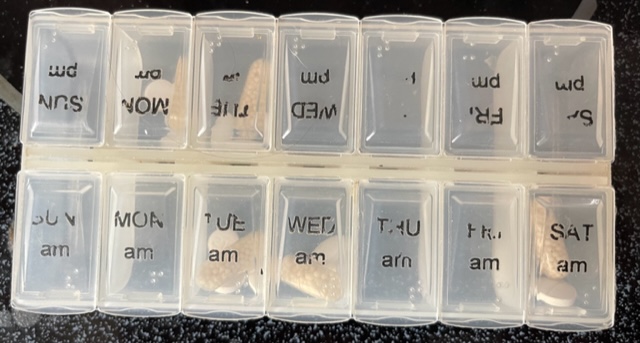 I’ve lost all track of what day it is. Most of my routine consists of daily tasks. Dogs have to be fed, meals have to be prepared. There’s the cocktail of drugs that, thanks to decades of habit, has to include coffee, or at least caffeine, to prevent a headache.

Then there are the tasks that aren’t bound to a specific day but still have to be done regularly: sweeping floors, vacuuming, laundry.

Once a week the garbage can has to be dragged to the curb. Once a month the recycling bin accompanies it. In spite of being time-specific these events don’t happen often enough to be routine. Sometimes I forget it’s Garbage Eve until I see the neighbors’ cans lined up along the street.

The past two weeks I’ve been on vacation which just made me realize how much structure work provides to my week—the Monday start, the long slog to the weekend. I haven’t missed it but it’s been weird. I’ve been dreaming I was at work which, unfortunately, doesn’t count even though I’m an hourly employee. Making it even stranger is that the return date isn’t fixed. Tomorrow when I go back in several people will still be out; I’ll be there one of the skeletons making up the crew.

I work for a university. It’ll be a few weeks before the students come back. I envy the long break they get but also the specificity of the date. For them things are set, structured. Freshmen will be returning with some college experience; seniors will be going in to face the final push. Sophomores and juniors can breathe easy; they’ve been here before and will be again. The teachers prepare to pick up where they left off.

My own schedule is more amorphous. Outside of, and even adjacent to, the holidays I have to set my own breaks. But the days slip too easily from one into another. This is the longest time I’ve taken off from work in, well, almost a year. That’s a mistake. The last year was more stressful for me than it should have been. I needed this break, and, with the new year starting, now seems like a great time to be more conscious of time. I need to take more breaks or I’ll end up broken.