What’s your wish for this holiday season?

I was inspired to ask that question by the mural on the side of a building, one which I really like because it only seems simple. The seeds blowing away mark the passing of time and the end of life that naturally comes with winter, but they also represent renewal and therefore hope. The seeds also become origami cranes. Birds fly south for the winter and will return when the seeds are sprouting. The fact that they’re origami cranes represents, I think, the transformative power of art, and there’s also a Japanese tradition that if one folds one thousand paper cranes one’s wish will come true. This tradition has been popularized by the life of Sadako Sasaki, a Japanese girl who developed leukemia after being exposed to radiation from the Hiroshima bombing and started folding paper cranes while fighting the disease. And, on that same subject please read this over at Rubber Shoes In Hell about a child who transformed lives and how you can help others. 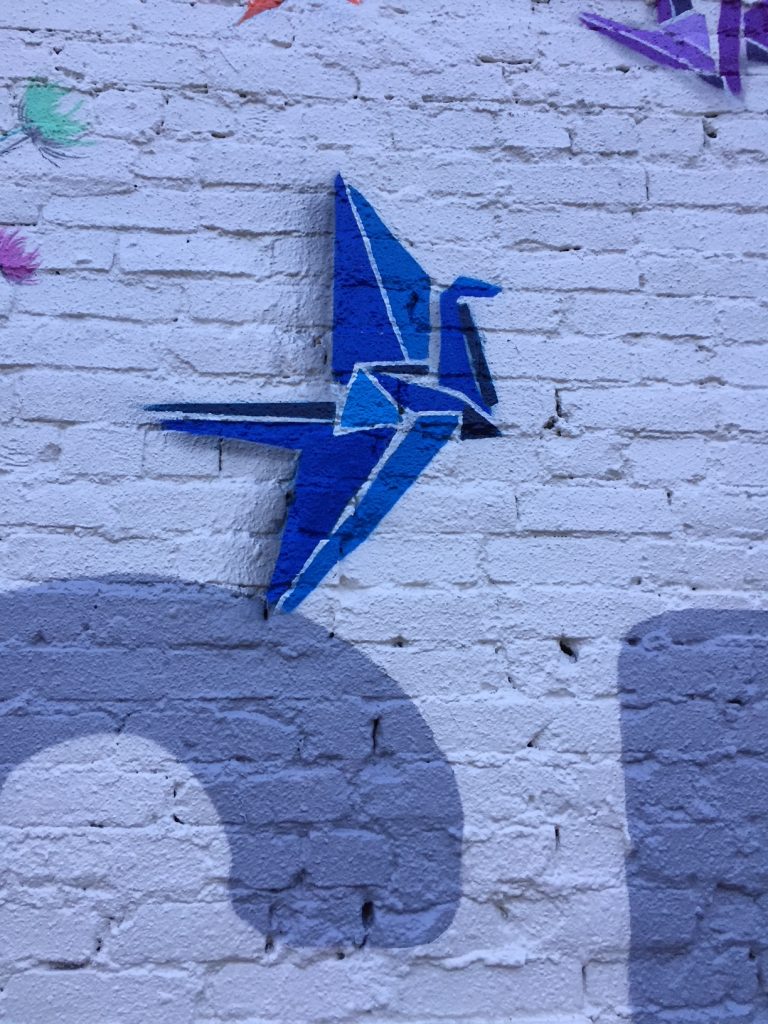 The mural also inspired me to ask, has any work of art ever really changed the world? That’s not an easy question and takes me back to high school when I thought about joining the debate team because some of my friends were on it. The teacher who headed the team gave me this practice question: Is the pen mightier than the sword? And that sent me spinning down a mental rabbit hole. The power of the pen, in the sense of communication, can command, organize, and even inspire swords, in the sense of military weaponry. An army marches on its stomach but the orders have to come in writing. On the other hand if we’re talking about literal pens and swords, well, I still think it depends on whether the person with the pen is small and quick or maybe able to sneak up behind the person with the sword, or maybe if one person has only one sword and the other has a shitload of pens, and finally, flop sweat pouring off of me, I asked, just how abstract is this question supposed to be? And I got sent to the principal’s office for saying “shitload” but that’s another story.

Can a work of art change the world? I guess it depends. One of the most transformative events in human history is the development of written language. It allowed us to store and pass on more information than the memory could hold. It allowed that information to be passed not only from one person to another but across generations. And it’s no accident that the greatest advances in technology and the most significant changes to what we call civilization really began with the invention of the printing press which allowed for the mass production of the written word. Can the mass-produced book, though, the mere written word, be considered a work of art? So my wish is that you’d please tell me just how abstract this question is supposed to be.

And also that all your wishes this year come true.